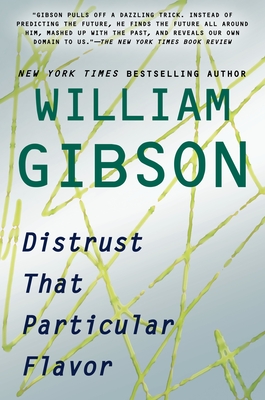 A collection of New York Times bestselling author William Gibson’s articles and essays about contemporary culture—a privileged view into the mind of a writer whose thinking has shaped not only a generation of writers but our entire culture...

Though best known for his fiction, William Gibson is as much in demand for his cutting-edge observations on the world we live in now. Originally printed in publications as varied as Wired, the New York Times, and the Observer, these articles and essays cover thirty years of thoughtful, observant life, and are reported in the wry, humane voice that lovers of Gibson have come to crave.

“Gibson pulls off a dazzling trick. Instead of predicting the future, he finds the future all around him, mashed up with the past, and reveals our own domain to us.”—The New York Times Book Review

Praise For Distrust That Particular Flavor…

“One of the most astute and entertaining commentators on our astonishing, chaotic present.”—The Washington Post Book World

“I forget that in addition to being a major novelist (Zero History, Neuromancer, etc.), he’s one of the best essayists and critical observers currently operating within our sociocultural sphere. This is his first essay collection, and it’s messed up how good it is: raw, weird, honest, smart.”—Lev Grossman, Time Entertainment

“Exquisitely written, done to a turn with both insight and that unmistakable prose that is just shy of spectacular....This is a fine and even essential complement to the Gibson canon, and a delight to read.”—BoingBoing.net

“Though he’s often lauded as a big-picture man, these pieces make one thing clear: He’s even better with the little details.”—A.V. Club

“[Gibson’s] new collection of nonfiction shows that his secret strong suit is with the here and the now.”—Los Angeles Times

“The most startling pieces here crackle with his excitement at discovering some unexpected aspect of the new.”—The Globe and Mail (Canada)