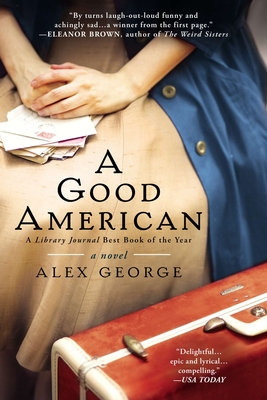 Everything he’d seen had been unimaginably different from the dry, dour streets of home, and to his surprise he was not sorry in the slightest. He was smitten by the beguiling otherness of it all.

And so began my grandfather’s rapturous love affair with America—an affair that would continue until the day he died.

This is the story of the Meisenheimer family, told by James, a third-generation American living in Beatrice, Missouri. It’s where his German grandparents—Frederick and Jette—found themselves after journeying across the turbulent Atlantic, fording the flood-swollen Mississippi, and being brought to a sudden halt by the broken water of the pregnant Jette.

A Good American tells of Jette’s dogged determination to feed a town sauerkraut and soul food; the loves and losses of her children, Joseph and Rosa; and the precocious voices of James and his brothers, sometimes raised in discord…sometimes in perfect harmony.

But above all, A Good American is about the music in Frederick’s heart, a song that began as an aria, was jazzed by ragtime, and became an anthem of love for his adopted country that the family still hears to this day.


Praise For A Good American…

“What does it mean to be a good citizen? A good member of a family? In A Good American, George considers both questions with humor, compassion, and grace. A beautifully written novel, laced with history and music.” —Emily St. John Mandel, author of Station Eleven

“This lush, epic tale of one family’s journey from immigrants to good Americans had me alternately laughing and crying, but always riveted. It’s a rich, rare treat of a book, and Alex George is a first-rate talent.” —Sara Gruen, New York Times bestselling author of Water for Elephants and Ape House"As epic as an opera, as intimate as a lullaby, A Good American swept me through an entire century of triumph and tragedy with the wonderful Meisenheimer family...Alex George has created that rare and beautiful thing—a novel I finished and immediately wanted to start again."—Eleanor Brown, New York Times bestselling author of The Weird Sisters
“A sweeping, lush intergenerational novel about a family…learning to live in twentieth-century America.”—O, The Oprah Magazine

Alex George is an Englishman who lives, works, and writes in the middle of America. He studied law at Oxford University and worked for eight years as a corporate lawyer in London and Paris before moving to the United States in 2003.
Loading...
or support indie stores by buying on