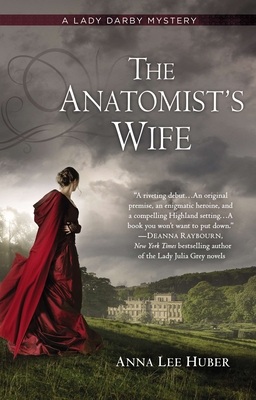 Scotland, 1830. Following the death of her husband, Lady Darby has taken refuge at her sister’s estate, finding solace in her passion for painting. But when her hosts throw a house party for the cream of London society, Kiera is unable to hide from the ire of those who believe her to be as unnatural as her husband, an anatomist who used her artistic talents to suit his own macabre purposes.

Kiera wants to put her past aside, but when one of the house guests is murdered, her brother-in-law asks her to utilize her knowledge of human anatomy to aid the insufferable Sebastian Gage—a fellow guest with some experience as an inquiry agent. While Gage is clearly more competent than she first assumed, Kiera isn’t about to let her guard down as accusations and rumors swirl.

When Kiera and Gage’s search leads them to even more gruesome discoveries, a series of disturbing notes urges Lady Darby to give up the inquiry. But Kiera is determined to both protect her family and prove her innocence, even as she risks becoming the next victim…

Praise For The Anatomist's Wife (A Lady Darby Mystery #1)…

Praise for The Anatomist’s Wife

“A fast-paced, atmospheric and chilling debut featuring a clever heroine with a shocking past and a talent for detection.  I’m already anticipating Lady Darby’s next adventure.”—National bestselling author Carol K. Carr

“An unusual and romantic heroine, haunted by a deadly past and trying to be herself in a society that wants to silence her—and worse.”—Judith Rock

“Huber's protagonist is complex and likable and the well-lotted mystery is filled with fascinating secondary characters. The setting is lavishly portrayed...you'll be engaged right to the end.”—RT Book Reviews

“Huber’s debut...reads like a cross between a gothic novel and a mystery with a decidedly unusual heroine.”—Kirkus Reviews