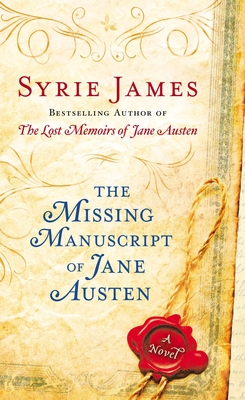 The Missing Manuscript of Jane Austen

The minute I saw the letter, I knew it was hers. There was no mistaking it: the salutation, the tiny, precise handwriting, the date, the content itself, all confirmed its ancient status and authorship…

Samantha McDonough cannot believe her eyes--or her luck. Tucked in an uncut page of a two-hundred-year old poetry book is a letter she believes was written by Jane Austen, mentioning with regret a manuscript that "went missing at Greenbriar in Devonshire." Could there really be an undiscovered Jane Austen novel waiting to be found? Could anyone resist the temptation to go looking for it?

Making her way to the beautiful, centuries-old Greenbriar estate, Samantha finds it no easy task to sell its owner, the handsome yet uncompromising Anthony Whitaker, on her wild idea of searching for a lost Austen work--until she mentions its possible million dollar value.

After discovering the unattributed manuscript, Samantha and Anthony are immediately absorbed in the story of Rebecca Stanhope, daughter of a small town rector, who is about to encounter some bittersweet truths about life and love. As they continue to read the newly discovered tale from the past, a new one unfolds in the present--a story that just might change both of their lives forever.


Praise For The Missing Manuscript of Jane Austen…

Praise for THE MISSING MANUSCRIPT OF JANE AUSTEN

"A novel within a novel honoring what we love most about Austen: her engaging stories, her rapier wit, and her swoon worth romance...pitch perfect, brilliantly crafted."--Austenprose

"Syrie James has surpassed herself...It'll be one of your favourite reads in 2013!"--My Jane Austen Book Club

"Ingenious!...An absorbing, reflective, and remarkable work of fiction that masterfully captures the essence and style of a Jane Austen novel."--Austenesque Reviews

"A delightful novel that you simply won't want to put down...A must read for all Jane Austen enthusiasts."--Confessions of an Avid Reader

"A magical book that readers will definitely store on their keeper shelf and read more than once."--RT Book Reviews

"Syrie James is a fine storyteller, with a sensitive ear for the Austenian voice."--Jane Austen's Regency World

"Offers a deeper understanding of what Austen's life might have been like."--Los Angeles Times

"Suspense builds, and it's a tribute to the world James creates that the readers will anxiously root for Jane to find true love and wealth, even though we know it never happened."--Kirkus Reviews

Syrie James is the author of five critically acclaimed novels, including the bestseller The Lost Memoirs of Jane Austen, The Secret Diaries of Charlotte Bronte, Nocturne, Dracula My Love, and Forbidden. Her books have been translated into eighteen foreign languages.

The Missing Manuscript of Jane Austen is a novel within a novel. How do you feel about James’s pacing in building Samantha’s present-day storyline and then switching back to Austen’s missing manuscript? Were you equally invested in each story? Would the book have been equally effective if The Stanhopes had been a stand-alone novel?

Jane Austen wrote that “pictures of perfection make me sick and wicked,“ and her main characters usually must acknowledge and learn from their mistakes before they can find happiness. How do Rebecca and Mr. Clifton earn their happy ending? What are their respective outlooks on life at the beginning of the novel? How do they each grow and change? How do the lessons they learn affect Samantha and Anthony—and help them earn their happy ending?

How did James’s building of characters like Dr. Jack Watkins, Mr. Clifton, and Amelia Davenport misrepresent their true personalities? Were you surprised when you learned the truth about them? Discuss the ways in which Austen employs a similar technique in her novels with characters such as Mr. Darcy, Mr. Wickham, and Isabella Thorpe.

Until Stephen shows up, he is only represented by his text messages and phone conversations. Samantha cares for Stephen, but she wonders if she loves him. What did you initially think of Stephen and of their relationship, and did your opinion change throughout the book?

Samantha theorizes that Mr. Stanhope and Mr. Spangle might be literary forerunners of Austen’s Mr. Woodhouse and Mr. Collins. How are they similar and different? What other Austen archetypes inhabit The Stanhopes, why are they familiar, and what makes them unique in their own right?

Samantha recounts in Entr’acte I that she hasn’t “cooked with a guy“ in a long time. Did you notice how the narrator’s voice seems to favor Anthony more after they finish reading the first part of the manuscript together—and why do you think this is? Did your opinion of Anthony change over the course of the novel? If so, why and how?

Discuss the various aspects of The Stanhopes which lead Samantha to conclude that it is the work of Jane Austen. Did you ever feel as though you were reading an actual “lost“ Austen manuscript? If so, how did that make you feel?

Samantha calls the scene before the ball where Amelia and Rebecca were “talking at cross purposes“ about a pending proposal a method that was “so Austen.“ Did you pick out any other “so Austen“ moments?

Rebecca Stanhope tells Miss Clifton that her own life used to be very small. Can Samantha say that the same is true for her? How so? Compare and contrast the two women’s situations at the beginning and the end of the story.

Mrs. Harcourt is a complex personality. Did you like her? Why or why not? How does she add to the plot and influence the outcome of the story?

Anthony eventually tells Samantha that he plans to auction off the manuscript to the highest bidder, regardless of its fate. Anthony values monetary gain, whereas Samantha values scholarship. With whom do you agree and why? Considering the value of the manuscript, if it came into your possession, what would you have done with it?

Money and its effect on people’s fates is a common theme in Austen’s novels. Discuss the ways in which money, or the lack of it, creates suspense and moves the plot forward in The Stanhopes. What did you think happened to the sum that disappeared at The King’s Arms at Leatherhead? Did you think Mr. Stanhope might be culpable?

Did you think that Mr. Clifton would propose to Miss Russell? What did you expect when he returned from his trip?

Samantha says that the male suitor who is painted as charming at the beginning of most Austen novels usually ends up being the wrong match for the novel’s heroine. Were you aware of this? If so, did it shape your first impression of the male characters that both Rebecca and Samantha encounter?

Laurel Ann is happy for Samantha when she announces that she will return to Oxford to complete her Ph.D. Likewise, Miss Clifton comes around to the fact that her brother is marrying Rebecca instead of her friend, Laura Russell. In both cases, the ability to accept change is a redeeming quality in these friendships. How did each character’s response to change and adversity affect the outcome of their individual story line?

What do Anthony’s and Mr. Clifton’s actions tell us about them, particularly at the end of the story? How do their deeds and choices make them worthy Austen heroes?

How does James make us sympathize with and respect Rebecca and Samantha? Are they worthy Austen heroines?

Compare and contrast all the offers of marriage that Rebecca receives in the book. How does each man’s manner of proposing reflect his personality, the depth of his feelings, and his suitability as a life partner for Rebecca?

Jane Austen was always discreet and proper in the portrayals of the lovers in her novels. How does James emulate this technique? At the end of The Missing Manuscript, Samantha and Anthony reveal their feelings and hopes in a climactic moment while walking together in an outdoor setting. Can you name three Austen novels in which the hero and heroine share a similar experience?

How did your experience reading The Stanhopes compare to other Jane Austen novels you’ve read? Do you think Jane would have approved?