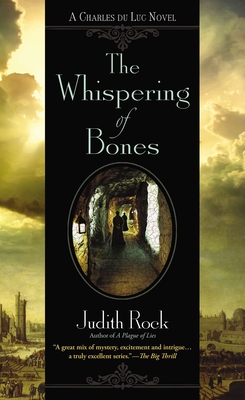 The Whispering of Bones (A Charles du Luc Novel #4)

“Rich with telling detail and a deep feeling for time and place,”* Judith Rock¹s historical mysteries are "a great mix of mystery, excitement and intrigue...a truly excellent series.”**

Paris, 1687.
The last thing Jesuit Charles du Luc and his elderly confessor expect to find in an ancient crypt is a newly murdered body. Even more troubling, the shock of discovering the victim—a young man about to enter their order—proves too much for Charles’s companion. Vowing justice, Charles wants nothing more than to discover the killer, but is unexpectedly restrained from investigation.

At the same moment, a fellow soldier has also entered the Jesuit Novice House, bringing Charles’s worst battlefield secret back to haunt him. And when another Jesuit disappears from the college of Louis le Grand and Charles himself is attacked, he begins to wonder whether there might be something more sinister afoot. All signs point to someone targeting Jesuits—and not even an ex-soldier like Charles may be able to escape...

“A necessary read for all who enjoy historical mysteries.”—Library Journal (starred review)

“Rich with telling detail and a deep feeling for time and place.”—Margaret Frazer, national bestselling author of The Apostate’s Tale

“Not only satisfies the taste of historical mystery lovers but anyone who likes complex plots, twists, and elaborate mysteries. … Judith Rock’s research is as impeccable as her writing style. … a great read.” —Mystery Tribune

“Amazing ... Ms. Rock takes you back to fascinating and dangerous 17th century Paris so well that I suspect her of being a time-traveler who's been there.”—Ariana Franklin, National bestselling author of Mistress of the Art of Death

For many years a modern dancer and choreographer, Judith Rock founded Body and Soul Dance Company in Berkeley, California, toured extensively as a solo concert dancer, and studied baroque dance. Research for her Ph.D. in art and theology took her to Paris, where she lived at the nearby Jesuit Cultural Center and researched the seventeenth- and eighteenth-century ballets produced at the Paris Jesuit College of Louis le Grand.

In a startling leap, Rock then spent several years as a police officer before taking that experience back to the stage as a playwright and actress. She was an auxiliary officer in the NYPD and later a part-time police officer in Minnesota, working midnight shifts.

Rock has written on dance, art, and theology for many journals, and has been artist-in-residence and taught and lectured at colleges, seminaries, and conferences across the United States and abroad. After years in New York, she and her husband now live in Sarasota, Florida.  The Rhetoric of Death, her first novel, was a 2011 Barry Award nominee.
Loading...
or
Not Currently Available for Direct Purchase