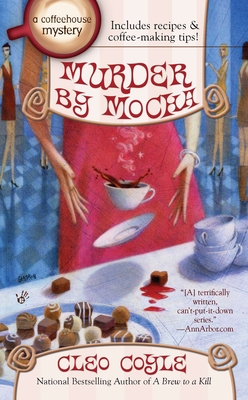 Murder by Mocha (A Coffeehouse Mystery #10)

Clare Cosi, manager and head barista of the landmark Village Blend coffeehouse, can brew a beverage to die for. But can she stir up some evidence against a bitter killer who’s gone loco for mocha?
Clare’s Village Blend beans are being used to create a new java love potion: a “Mocha Magic Coffee” billed as an aphrodisiac. Clare may even try some on her boyfriend, NYPD detective Mike Quinn—when he’s off duty, of course…

The product, expected to rake in millions, will be sold exclusively on Aphrodite’s Village, one of the Web’s most popular online communities for women. But the launch party ends on a sour note when one of the Website’s editors is found dead.

When more of the Website’s Sisters of Aphrodite start to die, Clare is convinced someone wants the coffee’s secret formula—and is willing to kill to get it. Clare isn’t about to spill the beans, but will she be next on the hit list? Includes recipes and coffee-making tips!

Praise For Murder by Mocha (A Coffeehouse Mystery #10)…

"Clare and company are some of the most vibrant characters I've ever read." --Mystery Scene Magazine

"What a pleasure to read a book by this author." --Portland Book Review

CLEO COYLE is a pseudonym for Alice Alfonsi, writing in collaboration with her husband, Marc Cerasini. Both are New York Times bestselling authors of The Coffeehouse Mysteries, now celebrating over ten years in print. Alice and Marc are also bestselling media tie-in writers who have penned properties for Lucasfilm, NBC, Fox, Disney, Imagine, and MGM. They live and work in New York City, where they write independently and together, including the nationally bestselling Haunted Bookshop Mysteries.
Loading...
or support indie stores by buying on
(This book is on backorder)