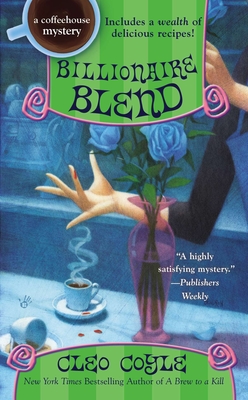 Landmark coffeehouse manager Clare Cosi has served her share of New York’s rich and famous, but even she is surprised by her explosive introduction to a mysterious Internet billionaire…
When a car bomb nearly kills tech whiz Eric Thorner, Clare comes to his aid and receives a priceless thank you. Not only does the billionaire buy her a barista’s dream espresso machine, he hires her to create the world’s most expensive coffee blend.

As Eric jets Clare around the globe on a head-spinning search for the world’s best coffee, she gets to know his world—a mesmerizing circle of money with rivalries that could easily have turned deadly. But is this charming young CEO truly marked for termination? Or is he the one making a killing?

“This is one of her best.”—Kirkus Reviews (starred review)

“Cleo Coyle’s Coffeehouse mystery series is among the best of the foodie/cozy mystery genre.”—Fresh Fiction

CLEO COYLE is a pseudonym for Alice Alfonsi, writing in collaboration with her husband, Marc Cerasini. Both are New York Times bestselling authors of The Coffeehouse Mysteries, now celebrating over ten years in print. Alice and Marc are also bestselling media tie-in writers who have penned properties for Lucasfilm, NBC, Fox, Disney, Imagine, and MGM. They live and work in New York City, where they write independently and together, including the nationally bestselling Haunted Bookshop Mysteries.
Loading...
or
Not Currently Available for Direct Purchase