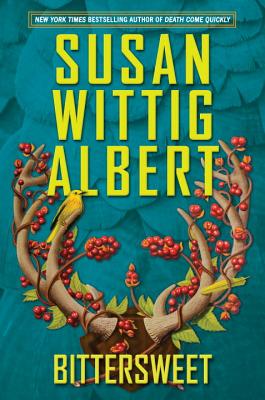 New from the author of Death Come Quickly and Widow's Tears
This Thanksgiving, be grateful for China Bayles—who teams up with an old friend to solve a complex case of theft and murder in a South Texas ranching community…

It’s Thanksgiving in Pecan Springs, and China is planning to visit her mother, Leatha, and her mother’s husband, Sam, who are enthusiastically embarking on a new enterprise—turning their former game ranch into a vacation retreat for birders. She’s also looking forward to catching up with her friend, game warden Mackenzie “Mack” Chambers, who was recently transferred to the area. But Leatha calls with bad news: Sam has had a heart attack.

How will Leatha manage if Sam can’t carry his share? She does have a helper, Sue Ellen Krause. But China discovers that Sue Ellen, who is in the process of leaving her marriage to the assistant foreman at a large trophy game ranch, is in some serious trouble. Before Sue Ellen can tell China the full story, her car veers off a deserted road and she is killed.

Meanwhile, when a local veterinarian is shot in what appears to be a burglary at his clinic, Mack Chambers believes his murder could be related to fawns stolen from a nearby ranch. As Mack follows the trail, China begins to wonder if Sue Ellen’s death may not have been an accident, and if there’s a connection to the stolen animals. But their search for the truth may put their own lives in danger…

Susan Wittig Albert grew up on a farm in Illinois and earned her Ph.D. at the University of California at Berkeley. A former professor of English and a university administrator and vice president, she is the author of the China Bayles Mysteries, the Darling Dahlias Mysteries, and the Cottage Tales of Beatrix Potter. Some of her recent titles include Death Come Quickly, Widow’s Tears, Cat’s Claw, The Darling Dahlias and the Texas Star, The Darling Dahlias and the Confederate Rose, and The Tale of Castle Cottage. She and her husband, Bill, coauthor a series of Victorian-Edwardian mysteries under the name Robin Paige, which includes such titles as Death at Glamis Castle and Death at Whitechapel.

Praise for the China Bayles Series:

"[Albert] consistently turns out some of the best-plotted mysteries on the market."--Houston Chronicle

“One of the best-written and [most] well-plotted mysteries I’ve read in a long time.”--Los Angeles Times

“Albert’s dialogue and characterizations put her in a class with lady sleuths V. I. Warshawski and Stephanie Plum.”--Publishers Weekly

“Display[s] a deep sense of the Texas hill country and [makes] good use of the strong, likable cast. Details of herbs and herbal remedies continue to flavor the always intriguing plots.”--Booklist