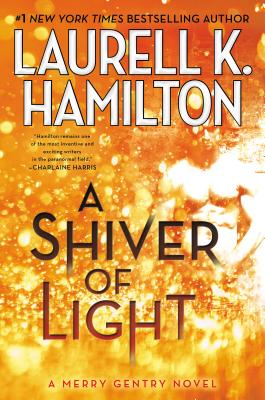 A Shiver of Light

"I am Princess Meredith NicEssus. Legal name Meredith Gentry, because Princess looks so pretentious on a driver's license. I was the first faerie princess born on American soil, but I wouldn t be the only one for much longer..."
Merry Gentry, ex private detective, now full-time princess, knew she was descended from fertility goddesses, but when she learned she was about to have triplets, she began to understand what that might mean. Infertility has plagued the high ranks of faerie for centuries. Now nobles of both courts of faerie are coming to court Merry and her men, at their home in exile in the Western Lands of Los Angeles, because they will do anything to have babies of their own.
Taranis, King of Light and Illusion, is a more dangerous problem. He tried to seduce Merry and, failing that, raped her. He's using the human courts to sue for visitation rights, claiming that one of the babies is his. And though Merry knows she was already pregnant when he took her, she can t prove it.
To save herself and her babies from Taranis she will use the most dangerous powers in all of faerie: a god of death, a warrior known as the Darkness, the Killing Frost, and a king of nightmares. They are her lovers, and her dearest loves, and they will face down the might of the high courts of faerie while trying to keep the war from spreading to innocent humans in Los Angeles, who are in danger of becoming collateral damage.


Praise For A Shiver of Light…

“Hamilton remains one of the most inventive and exciting writers in the paranormal field.”—Charlaine Harris

“This [faerie] society is one of the most detailed, imaginative, and lovingly drawn in all fantastic fiction, and the Meredith Gentry series has become something special.”—San Jose Mercury News

Laurell K. Hamilton is a full-time writer. She lives in a suburb of St. Louis with her family.