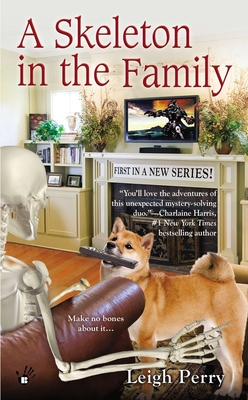 A Skeleton in the Family (A Family Skeleton Mystery #1)

A woman discovers the literal skeleton in her family’s closet in the first Family Skeleton Mystery!

Moving back into her parents’ house with her teenage daughter had not been Georgia Thackery’s “Plan A.” But when she got a job at the local college, it seemed the sensible thing to do. So she settled in and began reconnecting with old friends.

Including Sid. Sid is the Thackery family’s skeleton. He’s lived in the house as long as Georgia can remember, although no one, including Sid, knows exactly where he came from and how he came to be a skeleton.

Sid walks, he talks, he makes bad jokes, he tries to keep Georgia’s dog from considering him a snack.  And he manages to persuade Georgia to let him leave the house. But when she takes him to an anime convention—disguised as a skeleton, of course—he sees a woman who triggers memories of his past.

Now he is determined to find out how he died—with Georgia’s help.  But their investigation may uncover a killer who’s still alive and well and bad to the bone...

Praise for A Skeleton in the Family

“Dr. Georgia Thackery is smart, resourceful, and determined to be a great single mom to her teenager. Georgia is normal in every respect—except that her best friend happens to be a skeleton named Sid. You'll love the adventures of this unexpected mystery-solving duo.”—#1 New York Times bestselling author Charlaine Harris.

“Adjunct English professor Georgia Thackery makes a charming debut in A Skeleton in the Family. Georgia is fiercely loyal to her best friend, Sid, an actual skeleton who is somehow still ‘alive.’ When Sid see someone he remembers from his past life—who later turns up dead—Georgia finds herself trying to put together the pieces of Sid’s past as she works to hunt down a killer. Amateur sleuth Georgia, and her sidekick, Sid, are just plain fun!”—New York Times bestselling author Sofie Kelly

“No bones about it, Leigh Perry hooked me right from the beginning. An unusual premise, quirky characters, and smart, dry humor season this well-told mystery that kept me guessing until the very end. It's too bad Perry's sleuth is fictional—I'd invite Georgia over for dinner in a heartbeat.”—Bailey Cates, national bestselling author of Bewitched, Bothered and Biscotti

“A delightful cozy with a skeleton who will tickle your funny bone.”—Paige Shelton, national bestselling author of If Bread Could Rise to the Occasion

Leigh Perry is a pseudonym for Toni L.P. Kelner, who is an award-winning mystery author, and the co-editor, with Charlaine Harris, of a series of New York Times bestselling fantasy-mystery anthologies, including Many Bloody Returns; Wolfsbane & Mistletoe; Death's Excellent Vacation; An Apple for the Creature, and Home Improvement: Undead Edition.
Loading...
or support indie stores by buying on