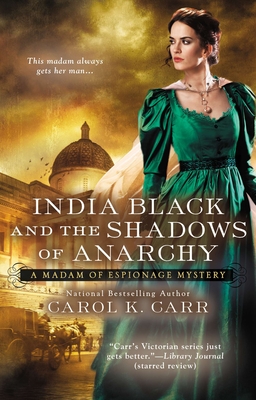 In Victorian London, India Black has all the attributes a high-class madam needs to run a successful brothel--wit, beauty, and an ability to lie with a smile. Luckily for Her Majesty's Government, all these talents also make her a first-rate spy...

India Black, full-time madam and occasional secret agent, is feeling restless, when one of Disraeli's men calls on her to meet the prime minister--alone. Even though all her previous meetings have been organized by the rakishly handsome spy French, it's been decided this is a mission India must attempt on her own.

Revolt has spread across Europe and reached the shores of England--anarchists have begun assassinating lords and earls, one by one. Now India must infiltrate the ranks of the underground group responsible for those attacks, the sinister Dark Legion. To stop their dread plot, India will go from the murkiest slums of London to the highest levels of society, uncovering secrets that threaten her very existence...

"India Black, the witty and resourceful young madam of a London brothel, is a delightful protagonist. I shall follow her future career with particular interest."—Vicki Lane, author of The Day of Small Things

After a career as an attorney and corporate executive, Carol K. Carr turned to writing.
Loading...
or
Not Currently Available for Direct Purchase