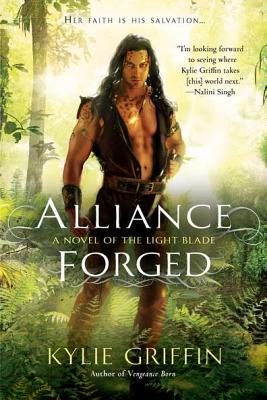 Alliance Forged (A Novel of the Light Blade #2)

There is no mercy in the demon realm. No escape. In this place of desperation and conflict, anyone who is not purebred is virtually powerless. Until a blind priestess lays claim to a half-breed warrior, body and soul…
Hunted and marked for death by Na’Reish demons for their half-blood heritage, the Na’Chi are searching for a new home—something an alliance offered by the human leader could provide. With both races divided by prejudice, when Light Blade rebels brutally attack the Na’Chi, the alliance seems doomed to fail.

Varian, leader of the Na’Chi, a hybrid race of gifted warriors, is cursed with the darker impulses of his demon heritage. Controlling the part of himself that craves the high of the battle is a struggle he’s afraid he’ll lose—until he meets Kymora Tayn, a priestess driven to serve her deity. While he’s unwilling to trust anyone outside his people, he finds himself drawn to Kymora’s strength and passionate nature, and discovers she has the power to calm the darkness inside him.

When the Na’Reish raid human territory for blood-slaves and kickstart the war, the key to the survival of both races—Na’Chi and human—is an alliance. However when Kymora is kidnapped, pitting human against human, Varian realizes he must embrace his darker half, not only to save the alliance…but also the woman he loves.

Praise For Alliance Forged (A Novel of the Light Blade #2)…

“Kylie Griffin has me hooked.”

Kylie Griffin’s obsession with all things paranormal/fantasy started at an early age, when she used to imagine the jacaranda tree in her front yard was a spaceship used to defend the world from invading enemies. Writing stories seemed a natural extension to her childhood adventures.

Today, she’s a primary school teacher sharing her love for the written word with young children. In her spare time, she writes and reads all things paranormal.

Kylie lives in a small rural village in outback New South Wales, Australia, and is involved in a number of volunteer emergency organizations, helping during fires, storms, search and rescue efforts, and road accidents.
Loading...
or
Not Currently Available for Direct Purchase