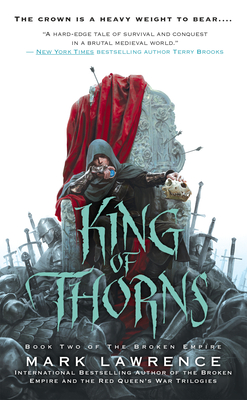 In book two of the Broken Empire trilogy, the boy who would be king has gained the throne—but the crown is a heavy weight to bear...

At age nine, Prince Honorous Jorg Ancrath vowed to avenge his slaughtered mother and brother—and to punish his father for not doing so. At fifteen, he began to fulfill that vow. Now, at eighteen, he must fight for what he has taken by torture and treachery.

Haunted by the pain of his past, and plagued by nightmares of the atrocities he has committed, King Jorg is filled with rage. And even as his need for revenge continues to consume him, an overwhelming enemy force marches on his castle.

Jorg knows that he cannot win a fair fight. But he has found a long-hidden cache of ancient artifacts. Some might call them magic. Jorg is not certain—all he knows is that their secrets can be put to terrible use in the coming battle...

Mark Lawrence is the author of the Broken Empire trilogy, the Red Queen's War trilogy, and the Book of the Ancestor series. He is a former research scientist working on artificial intelligence. He is a dual national with both British and American citizenship, and has held secret-level clearance with both governments.

Praise For King of Thorns (The Broken Empire #2)…

Praise for King of Thorns

“This dark and gritty fantasy adventure should please fans of military fantasy and no-frills action.”—Library Journal

“The whole book is really like one action scene that doesn’t end...King of Thorns is epic fantasy on a George R. R. Martin scale, but on speed.”—Fixed on Fantasy

“A tour de force. ‘Impressive’ doesn’t even begin to describe its content. Truly a phenomenal series so far.”—Choice Book Reviews

“King of Thorns is a novel that solidifies Mark Lawrence’s place as one of fantasy’s most talented authors.”—Fantasy Faction

“This is a dark story that demands attention from its readers but also rewards them immensely for their attention in the end. Read King of Thorns to be shocked and awed by the boy who would be king.”—Fantasy Book Critic
or support indie stores by buying on
Copyright © 2020 American Booksellers Association