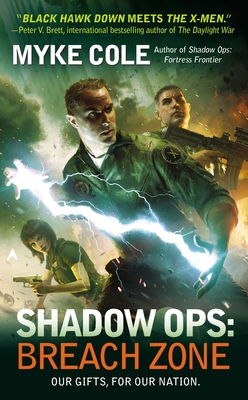 The Great Reawakening did not come quietly. Across the country and in every nation, people began “coming up Latent,” developing terrifying powers—summoning storms, raising the dead, and setting everything they touch ablaze. Those who Manifest must choose: become a sheepdog who protects the flock or a wolf who devours it…

In the wake of a bloody battle at Forward Operating Base Frontier and a scandalous presidential impeachment, Lieutenant Colonel Jan Thorsson, call sign “Harlequin,” becomes a national hero and a pariah to the military that is the only family he’s ever known.

In the fight for Latent equality, Oscar Britton is positioned to lead a rebellion in exile, but a powerful rival beats him to the punch: Scylla, a walking weapon who will stop at nothing to end the human-sanctioned apartheid against her kind.

When Scylla’s inhuman forces invade New York City, the Supernatural Operations Corps are the only soldiers equipped to prevent a massacre. In order to redeem himself with the military, Harlequin will be forced to face off with this havoc-wreaking woman from his past, warped by her power into something evil…

Praise for the Shadow Ops novels

“Cross The Forever War with Witchworld, add in the real world modern military of Black Hawk Down, and you get Shadow Ops: Control Point, the mile-a-minute story of someone trying to find purpose in a war he never asked for.”—Jack Campbell, New York Times bestselling author of The Lost Fleet Series

“The best ride military fantasy has to offer.”—Mark Lawrence, author of Emperor of Thorns