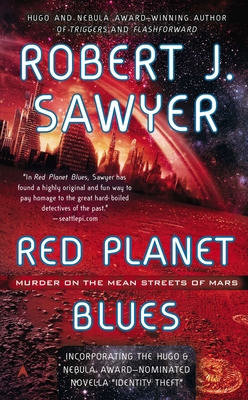 The name’s Lomax—Alex Lomax. I’m the one and only private eye working the mean streets of New Klondike, the Martian frontier town that sprang up forty years ago after Simon Weingarten and Denny O’Reilly discovered fossils on the Red Planet. Back on Earth, where anything can be synthesized, the remains of alien life are the most valuable of all collectibles, so shiploads of desperate treasure hunters stampeded here in the Great Martian Fossil Rush.

I’m trying to make an honest buck in a dishonest world, tracking down killers and kidnappers among the failed prospectors, the corrupt cops, and a growing population of transfers—lucky stiffs who, after striking paleontological gold, upload their minds into immortal android bodies. But when I uncover clues to solving the decades-old murders of Weingarten and O’Reilly, along with a journal that may lead to their legendary mother lode of Martian fossils, God only knows what I’ll dig up...

“In Red Planet Blues, Sawyer has found a highly original and fun way to pay homage to the great hard-boiled detectives of the past.”—seattlepi.com

“Red Planet Blues resurrects the noir mystery, the gold-rush western, and the science-fiction adventure and the result is a unique, fun story that keeps you guessing, keeps the pages turning, and manages to put a smile on your face every few pages, in spite of the pulse-pumping action and adventure.”—Orson Scott Card’s InterGalactic Medicine Show

Robert J. Sawyer lives in Toronto. He has won both the Hugo and Nebula awards for best novel, as well as the Crime Writers of Canada’s Arthur Ellis Award for mystery fiction. The ABC TV series FlashForward was based on his novel of the same name. He is also the author of the WWW Trilogy (WWW: Wake, WWW: Watch, WWW: Wonder), Illegal Alien, and Triggers.
Loading...
or
Not Currently Available for Direct Purchase