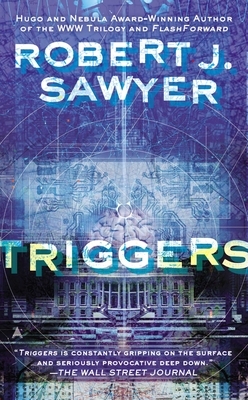 On the eve of a secret military operation, an assassin’s bullet strikes President Seth Jerrison. He is rushed to the hospital, where surgeons struggle to save his life—and where Professor Ranjip Singh is experimenting with a device that can erase traumatic memories.

Then a terrorist bomb detonates. In the operating room, the president suffers cardiac arrest. He has a near-death experience—but the memories that flash through Jerrison’s mind are not his own. The electromagnetic pulse generated by the bomb amplified and scrambled Professor Singh’s equipment, allowing a random group of people to access one another’s minds.

One of those people can retrieve the President Jerrison’s memories—including classified information regarding the upcoming military mission, which, if revealed, could cost countless lives. But the task of determining who has switched memories with whom is a daunting one—particularly when some of the people involved have reason to lie…

“Triggers is constantly gripping on the surface and seriously provocative deep down.”—Wall Street Journal
“Enthralling. Despite the near-dystopian setting, Triggers is haunting in its optimism. It was a joy to read.” —San Francisco Book Review
“Triggers has the hard-core military/political insights of Robert A. Heinlein, and the compassion of Theodore Sturgeon.”—Jonathan Vos Post

“No one digs into a sci-fi thought experiment with quite the zest that Robert J. Sawyer does. Sawyer doesn’t stint the thriller framework, but the story’s real joy is the care he takes in exploring the details of the memory-sharing.”—Milwaukee Journal Sentinel

“First and foremost, Robert J. Sawyer is a rip-roaring good storyteller...There are few authors writing today that bring such a strong combination of literate storytelling and complex ideas to the page. Robert J. Sawyer is one of the best in the business right now, and Triggers is him at his finest.”—The Maine Edge (Bangor, Maine)

“Robert J. Sawyer pulls together elements of a gripping political thriller with cutting-edge psychological insights to create a story that works on many levels. Triggers has the pacing of an episode of 24 and the philosophical sensibilities of an Isaac Asimov novel, so any readers who were introduced to Sawyer through his television series FlashForward will find it particularly interesting.”—Black Gate

Robert J. Sawyer has won both the Hugo and Nebula Awards for best novel. The ABC TV series FlashForward was based on his novel of the same name.
Loading...
or
Not Currently Available for Direct Purchase