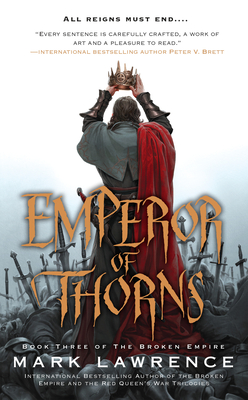 In the final novel in the Broken Empire Trilogy, the boy who would rule all may have finally met his match...

King Jorg Ancrath is twenty now—and king of seven nations. His goal—revenge against his father—has not yet been realized, and the demons that haunt him have only grown stronger. Yet no matter how tortured his path, he intends to take the next step in his upward climb.

Jorg would be emperor. It is a position not to be gained by the sword but rather by vote. And never in living memory has anyone secured a majority of the vote, leaving the Broken Empire long without a leader. Jorg plans to change that. He’s uncovered the lost technology of the land, and he won’t hesitate to use it.

But he soon finds an adversary standing in his way, a necromancer unlike any he has ever faced—a figure hated and feared even more than himself: the Dead King.

Mark Lawrence is a research scientist working on artificial intelligence. He is a dual national with both British and American citizenship, and has held secret-level clearance with both governments. At one point, he was qualified to say, “This isn’t rocket science—oh wait, it actually is.” He is the author of the Broken Empire trilogy (Prince of Thorns, King of Thorns, and Emperor of Thorns), the Red Queen’s War trilogy (Prince of Fools, The Liar’s Key, and The Wheel of Osheim) and the Book of the Ancestor series (Red Sister).

Praise For Emperor of Thorns (The Broken Empire #3)…

“Drop whatever else you’re reading and start the Broken Empire trilogy...[Emperor of Thorns] is told in a vivid prose filled with profound reflection and brilliant metaphor. Every sentence is carefully crafted, a work of art and a pleasure to read.”—Peter V. Brett, international bestselling author

“Simply said, The Broken Empire is a brilliantly written series. Every sentence is just a pure joy to read and carefully crafted. Numerous words like wordsmith and modern fantasy poet spring to mind but you should just find it out for yourself. A perfect ending to a brilliant trilogy and an unpredictable, ruthless and poetic literary masterwork of a great mind.”—Fantasy Book Review

“A conclusion that is not only emotional and satisfying, but clever and unexpected, a fascinating twist within the concept of the narrative...Mark Lawrence has written a brilliant and enthralling tale—a trilogy that has gripped from the first scene to the very last.”—Starburst Magazine

“Lawrence ends his majestically epic and magical post-apocalyptic trilogy like it started: with bloody yet beautiful prose. He unwraps more clues to the past with dialogue that chills and characters you’d not want to meet in nightmares, where heroes are dark and evil fiends darkest of all. This book will go down as one of the best ever. Bravo!”—RT Book Reviews
or support indie stores by buying on
Copyright © 2020 American Booksellers Association