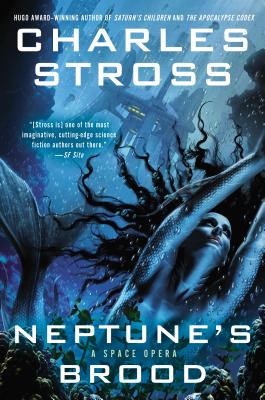 The year is AD 7000. The human species is extinct for the fourth time due to its fragile nature.
Krina Alizond-114 is metahuman, descended from the robots that once served humanity. She's on a journey to the water-world of Shin-Tethys to find her sister Ana. But her trip is interrupted when pirates capture her ship. Their leader, the enigmatic Count Rudi, suspects that there's more to Krina's search than meets the eye.
He's correct: Krina and Ana each possess half of the fabled Atlantis Carnet, a lost financial instrument of unbelievable value capable of bringing down entire civilizations. Krina doesn t know that Count Rudi suspects her motives, so she accepts his offer to get her to Shin-Tethys in exchange for an introduction to Ana.
And what neither of them suspects is that a ruthless body-double assassin has stalked Krina across the galaxy, ready to take the Carnet once it is whole and leave no witnesses alive to tell the tale

“Charles Stross may be the science fiction field’s most exciting writer.”—SFRevu

“A new kind of future requires a new breed of guide—someone like Stross.”—Popular Science

“The act of creation seems to come easily to Charles Stross…[He] is peerless at dreaming up devices that could conceivably exist in six, sixty, or six hundred years’ time.”—The New York Times

Charles Stross, born in 1964, is a full-time science fiction writer and resident of Edinburgh, Scotland. The author of six Hugo-nominated novels and winner of the 2005 Hugo Award for best novella ( The Concrete Jungle ), Stross has had his work translated into more than twelve languages. He has worked as a pharmacist, software developer, and tech-industry journalist."
Loading...
or
Not Currently Available for Direct Purchase