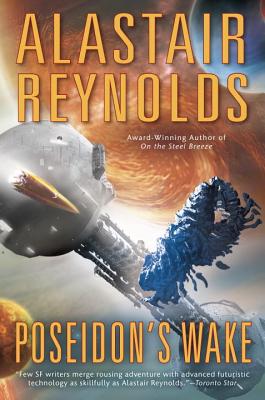 In the conclusion of Alastair Reynolds’ epic Poseidon’s Children saga, the Akinya family receives an invitation from across the stars—and a last opportunity to redeem their name...

The cryptic message originated seventy light-years away from the planet Crucible, where Ndege Akinya lives under permanent house arrest for her role in the catastrophe that killed 417,000 people. Could it be from her mother, Chiku, who vanished during a space expedition decades earlier?

Ndege’s daughter, Goma, a biologist, joins the crew of the Travertine, dispatched to Gliese 163 to uncover the source behind the enigmatic message.

Goma’s odyssey will take her not only into the furthest reaches of space but centuries into her family’s past where the answers to the universe’s greatest mysteries await...

“Reynolds’ scientific education is on full display, as the novel permeates a sense of realism throughout, from the scientific ideas—even the most far-flung ones—to the nature of the characters and their relationships, which eschew the normal ‘dark,’ Hollywood-like trend of action heroes in literature, with a sense of optimism and discovery...It’s grand, involving and full of light and wonder. Poseidon’s Wake is one of the best sci-fi novels of the year.”—SciFi Now

“Reynolds blends AIs, mysterious aliens, intelligent elephants and philosophical ruminations on our place in the universe in a well-paced, complex story replete with intrigue, invention and an optimism uncommon in contemporary SF.”—The Guardian (UK)

“If you are a fan of widescreen, hard SF, such as Iain Banks’ Culture stories or Charles Stross’ space opera novels, but have not yet tried Alastair Reynolds, then you genuinely are in for a real treat. This is the definition of early 21st century, cutting-edge space opera!”—Concatenation

“Concluding in a tense rescue mission reminiscent of writers like Arthur C. Clarke, Poseidon’s Wake is a novel unafraid to ask big questions about human nature and, for that matter, about the ‘truth of life’s fate in the cosmos.’”—Irish Examiner

“In the classic speculative fiction tradition, [Reynolds] grounds his vision of the future in timeless discussions about the meaning of existence.”—Publishers Weekly

Alastair Reynolds is the author of the Poseidon’s Children series and the Revelation Space series. Born in Barry, South Wales, he studied at Newcastle University and the University of St. Andrews. A former astrophysicist for the European Space Agency, he now writes full-time.
Loading...
or
Not Currently Available for Direct Purchase