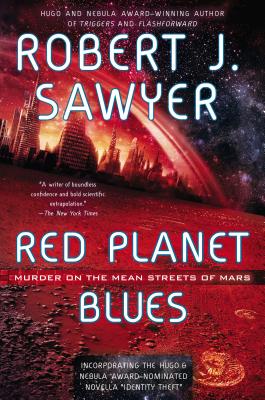 Robert J. Sawyer, the author of such revelatory and thought-provoking * novels as "Triggers "and The WWW Trilogy, presents a noir mystery expanded from his Hugo and Nebula Award-nominated novella Identity Theft and his Aurora Award-winning short story Biding Time, and set on a lawless Mars in a future where everything is cheap, and life is even cheaper
Alex Lomax is the one and only private eye working the mean streets of New Klondike, the Martian frontier town that sprang up forty years ago after Simon Weingarten and Denny O Reilly discovered fossils on the Red Planet. Back on Earth, where anything can be synthesized, the remains of alien life are the most valuable of all collectibles, so shiploads of desperate treasure hunters stampeded to Mars in the Great Martian Fossil Rush.
Trying to make an honest buck in a dishonest world, Lomax tracks down killers and kidnappers among the failed prospectors, corrupt cops, and a growing population of "transfers" lucky stiffs who, after striking paleontological gold, upload their minds into immortal android bodies. But when he uncovers clues to solving the decades-old murders of Weingarten and O Reilly, along with a journal that may lead to their legendary mother lode of Martian fossils, God only knows what he ll dig up...
*"The Globe and Mail.

Praise for Robert J. Sawyer “A writer of boundless confidence and bold scientific extrapolation.”—The New York Times “Cracking open a new Robert J. Sawyer book is like getting a gift from a friend who visits all the strange and undiscovered places in the world. You can’t wait to see what he’s going to amaze you with this time.”—John Scalzi, author of Redshirts “Robert J. Sawyer explores the intersection between big ideas and real people.”—Robert Charles Wilson, Hugo Award-Winning Author of A Bridge of Years “Sawyer is producing some of the most intelligent sci-fi out there...Complex characters and complex ideas are interwoven into a narrative that draws the reader into the world that Sawyer has created.”—The Maine Edge (Bangor, Maine) “When people call science fiction a literature of ideas, they mean Robert J. Sawyer.”—SciFi Magazine

Robert J. Sawyer has won both the Hugo and Nebula Awards for best novel, as well as the Crime Writers of Canada s Arthur Ellis Award for mystery fiction. The ABC TV series "FlashForward" was based on his novel of the same name."
Loading...
or
Not Currently Available for Direct Purchase