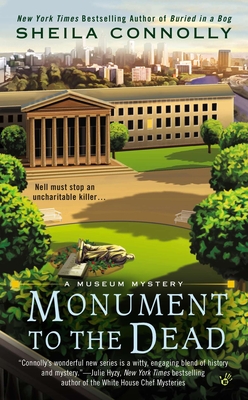 Monument to the Dead (A Museum Mystery #4)

As president of the Pennsylvania Antiquarian Society in Philadelphia, Nell Pratt relies on the generosity of philanthropists. But when someone starts killing benefactors, it’s Nell’s turn to come to their aid…

When Nell reads the obituary of a former board member, Adeline Harrison, she makes a mental note to send flowers and doesn’t think twice about it—until FBI agent James Morrison shares his suspicions about the nature of Adeline’s death. It turns out that a number of other members of the local cultural community have died in the last few months, under similar circumstances.

Soon Nell uncovers what seems to be a plot to rid Philadelphia of harmless, elderly philanthropists—but why? If she can figure out the killer’s motive, she has a chance of stopping the misanthropic murderer before another do-gooder is done in…


Praise For Monument to the Dead (A Museum Mystery #4)…

Praise for the Museum Mysteries

“[A] clever, charming, and sophisticated caper…A real page-turner!”—Hank Phillippi Ryan, Agatha, Anthony, and Macavity Award–winning author of The Other Woman

Sheila Connolly is the New York Times bestselling and Agatha Award–nominated author of the Museum Mystery series, the Orchard Mystery series, and the County Cork Mystery series. She has taught art history, structured and marketed municipal bonds for major cities, worked as a staff member on two statewide political campaigns, and served as a fund-raiser for several nonprofit organizations. She also managed her own consulting company, providing genealogical research services. In addition to genealogy, Sheila loves restoring old houses, visiting cemeteries, and traveling. Now a full-time writer, she thinks writing mysteries is a lot more fun than any of her previous occupations. She is married and has one daughter and two cats. Visit her online at www.sheilaconnolly.com.
Loading...
or
Not Currently Available for Direct Purchase