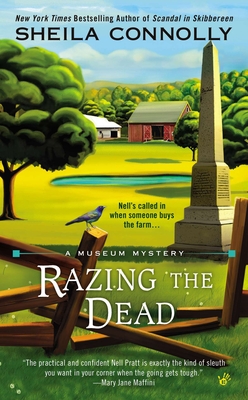 Razing the Dead (A Museum Mystery #5)

Between the challenges of her position as president of the Pennsylvania Antiquarian Society in Philadelphia and of taking her relationship with FBI agent James Morrison to the next level, Nell Pratt has got her hands full. Nevertheless, when a powerful developer approaches the Society to make sure the old dairy farm he wants to level is not hiding any archeological or historical surprises that could derail the project he’s planning, Nell decides to make time to personally accompany him to the proposed site.

But when they get to the property, they stumble upon a startling discovery—a body floating facedown in a pond. The dead man turns out to be an amateur history enthusiast, who may have uncovered secrets about the farm that got him killed. Now it’s up to Nell and James to get to the bottom of things before there are more deadly developments…

Praise For Razing the Dead (A Museum Mystery #5)…

Praise for the Museum Mysteries

“Sheila Connolly has written another winner in her Museum Mystery series…The facts and history that Ms. Connolly provides certainly adds to the charm of the story…[A] real page- turner.”—MyShelf.com

“A witty, engaging blend of history and mystery with a smart sleuth who already feels like a good friend. … [Connolly’s] stories always keep me turning pages—often well past my bedtime.”—Julie Hyzy, New York Times bestselling author of the White House Chef Mysteries

“The archival milieu and the foibles of the characters are intriguing, and it’s refreshing to encounter an FBI man who is human, competent, and essential to the plot.”—Publishers Weekly

“The practical and confident Nell Pratt is exactly the kind of sleuth you want in your corner when the going gets tough. Sheila Connelly serves up a snappy and sophisticated mystery that leaves you lusting for the next witty installment.”—Mary Jane Maffini, author of the Charlotte Adams Mysteries

“The mystery is great, and will have readers guessing all the way until the end.”––RT Book Reviews

Sheila has taught art history, structured and marketed municipal bonds for major cities, worked as a staff member on two statewide political campaigns, and served as a fundraiser for several nonprofit organizations. She also managed her own consulting company, providing genealogical research services. In addition to genealogy, Sheila loves restoring old houses, visiting cemeteries, and traveling. Now a full-time writer, she thinks writing mysteries is a lot more fun than any of her previous occupations.

She is married and has one daughter and two cats.
Loading...
or
Not Currently Available for Direct Purchase