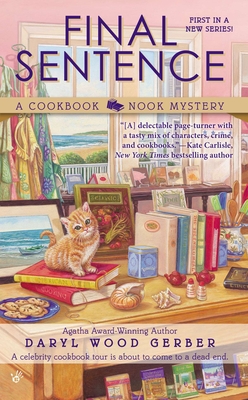 In need of a change, Jenna Hart leaves the high-pressure world of advertising to help her aunt, Vera, open a culinary bookshop and café. Back with her family in Crystal Cove, California, Jenna seems to have all the right ingredients for a fresh start—until someone adds a dash of murder.

As a marketing expert, Jenna wants to make sure the grand opening of the Cookbook Nook draws a crowd, and no one is better at getting attention than her old college roommate, celebrity chef Desiree Divine. But when Desiree arrives in quiet Crystal Cove to do a cookbook signing, the diva stirs up more trouble than business…especially when she turns up dead.

Known for stealing husbands and burning bridges, Desiree left behind plenty of suspects—including Jenna. Though the celebrity’s life always appeared to be an open book, Jenna will have to read between the lines in order to clear her name, and catch a killer before another body is served cold.

“There’s a feisty new amateur sleuth in town and her name is Jenna Hart. With a bodacious cast of characters, a wrenching murder, and a collection of cookbooks to die for, Daryl Wood Gerber’s Final Sentence was a page-turning puzzler of a mystery that I could not put down.”—Jenn McKinlay, New York Times bestselling author of the Cupcake Bakery Mysteries

Daryl Wood Gerber is an Agatha Award-winning author who writes the Cheese Shop Mystery series under the pseudonym Avery Aames. Like her protagonist, Daryl is an admitted foodie and an avid reader of books, including cookbooks. Prior to writing, Daryl acted onstage and television, including on Murder, She Wrote.
Loading...
or
Not Currently Available for Direct Purchase