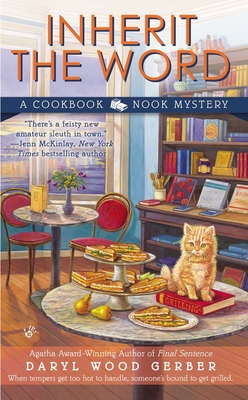 Jenna Hart moved back to Crystal Cove, California, to recapture her joie de vivre and to help her aunt Vera run the local culinary bookshop and café. But it’s hard to follow a simple recipe for relaxation when murder gets thrown in the mix…

The Cookbook Nook is set to host the town’s upcoming Grill Fest, a tasty tradition which pits local amateur chefs against one another to concoct the most delicious dishes. This year’s challenge: grilled cheese. But with competing chefs bearing grudges from past years, more mouths are running off than savoring the fare.

The expression “too many cooks” proves all too true when the eight-time champ is found murdered in the alley behind the café. Soon a local diner owner (and Jenna’s “second mother”) is suspected of bumping off the competition, and Jenna has to douse the flames before the wrong person gets burned…

Praise For Inherit the Word (A Cookbook Nook Mystery #2)…

Praise for the Cookbook Nook series

Daryl Wood Gerber is an Agatha Award-winning author who writes the Cheese Shop Mysteries under the pseudonym Avery Aames. Like her protagonist, Daryl is an admitted foodie and an avid reader of books, including cookbooks. Prior to writing, Daryl acted on stage and television, including on Murder, She Wrote.
Loading...
or
Not Currently Available for Direct Purchase