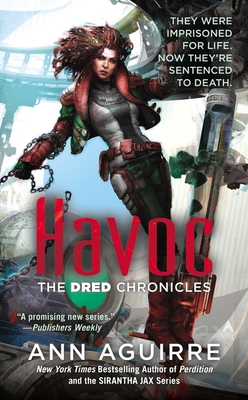 The Conglomerate’s most dangerous convicts have made the prison ship Perdition their home. And they will defend it…

Perdition is under siege. Mercenaries have boarded the station with orders to take control of the facility—and execute the prisoners. Their commander is offering full pardons to the first five inmates willing to help the mercs complete their mission.

Dresdemona “Dred” Devos hasn’t survived hard time just to surrender to the Conglomerate’s armored thugs. Leading a ragtag army of inmates, Dred and her champion, Jael, wage a bloody guerilla war of chaos and carnage against impossible odds. But no matter how dire the outlook, the Dread Queen never backs down…

Praise For Havoc (The Dred Chronicles #2)…

“Definitely a must for fans of Aguirre’s Sirantha Jax series or Joss Whedon’s Firefly.”—Vampire Book Club

“Aguirre revisits the classic idea of survival within an anarchic, violent society, offering protagonists whose moral gray contrasts with the stygian dark of those around them. Sirantha Jax fans may be intrigued to see what befell Jael after his ill-considered actions there, and new lead Dred is a strong linchpin for a promising new series.”—Publishers Weekly