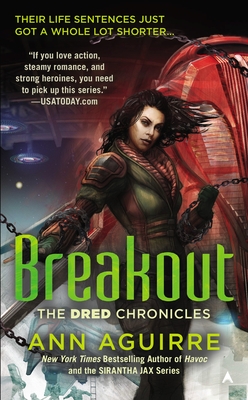 The prison ship Perdition has become a post-battle charnel house with only a handful of Dred’s soldiers still standing and now being hunted by Silence’s trained tongueless assassins. Forging an uneasy alliance with mercenary commander Vost—who is their only chance at escape—the Dread Queen will do whatever it takes to end her life sentence on Perdition and keep the survivors alive long enough to cobble together a transport capable of getting them off station.

If Dred and her crew can win the deadly game of cat and mouse, the payoff is not only life but freedom—a prize sweeter than their wildest dreams. Yet the sadistic Silence would rather destroy Perdition than let a single soul slip from her grasp…

Praise For Breakout (The Dred Chronicles #3)…

Praise for the Dred Chronicles:

"There's so much action, so much adventure, and more than that, it's great writing."—USA Today

"Sirantha Jax fans may be intrigued to see what befell Jael after his ill-considered actions there, and new lead Dred is a strong linchpin for a promising new series."—Publishers Weekly

"Spectacularly and spell-bindingly perfect with high octane action that keeps you on the edge of your seat and a romance that is surprisingly sweet and tender in a harsh and unforiving setting...This is honestly one of the best SF romance series I have read." —Book Pushers