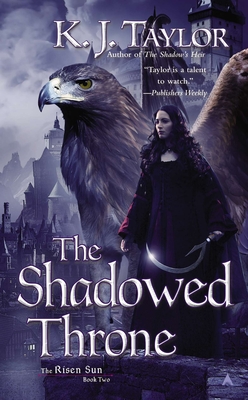 The Shadowed Throne (The Risen Sun #2)

Arenadd Taranisäii, infamous leader of the Northern people, has vanished. Only his half-breed daughter Laela knows what happened to him. Left to rule her father’s Kingdom, Laela is all that stands in the way of the war her cousin Saeddryn wants to declare. But Laela faces a far more dangerous enemy: the Night God herself wants Laela dead.

Faced by enemies on all sides, Laela must learn to rule, and survive, with her griffin partner Oeka by her side. As allies come from unexpected places, someone new will enter Laela’s life: the mysterious shapeshifter Kullervo.

But soon the Night God will send the most dangerous enemy of all—the deadly Shadow That Walks, an invincible murderer created to fulfill only one mission: kill Laela.

Praise For The Shadowed Throne (The Risen Sun #2)…

Praise for The Shadow’s Heir

“[The Shadow’s Heir] showcases the author’s impressive ability to create a nicely developed world populated by complex characters…look forward to seeing what new developments are birthed from this author’s labyrinthine imagination!”—Night Owl Reviews

“[A] compelling and exciting story…K. J. Taylor has [a] rare gift for a fantasy writer of knowing how to keep the story moving. I am eagerly looking forward to book two in the series.”—SFFans.org

“I loved [The Shadow’s Heir]…it forms a great basis for an epic new story, one that I am looking forward to following. I’ve said it once, but I’ll say it again: K. J. Taylor is a talented author who continues to bring us spellbinding stories and if you aren’t already reading her books, then you should remedy that!”—Speconspecific.com

Born in Canberra in 1986, Katie J. Taylor attended Radford College, where she wrote her first novel, The Land of Bad Fantasy. She studied for a Bachelor's Degree in Communications at the University of Canberra, and graduated in 2007 before going on to do a Graduate Certificate in Editing in 2008.