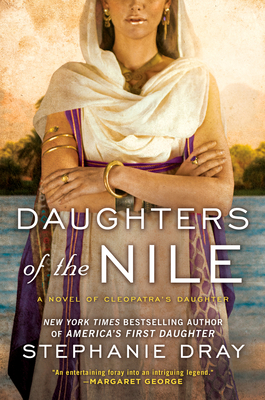 New York Times bestselling author Stephanie Dray’s historical fiction series comes to a stunning conclusion as the daughter of Cleopatra risks everything to revive her dynasty.

After years of abuse as the emperor’s captive in Rome, Cleopatra Selene is now a powerful queen, ruling over the exotic kingdom of Mauretania with her husband, King Juba II, by her side. But when a jealous Augustus Caesar demands that her children be given over to him to be fostered in Rome, Selene is drawn back into the web of imperial plots and intrigues that she vowed to leave behind...

Determined and resourceful, Selene must shield her loved ones from the emperor’s wrath, all while vying with ruthless rivals like King Herod. But unless she can find a way to overcome the threat to her marriage, kingdom, family, and faith, Selene may very well be the last of her line...

Praise For Daughters of the Nile (Cleopatra's Daughter Trilogy #3)…

Praise for Daughters of the Nile

“Brings to life one of the ancient world’s most important, interesting, and little known devotees of the goddess Isis. Magical!”—M. Isidora Forrest

“With clear prose, careful research, vivid detail, and a dash of magic, Stephanie Dray brings true life to one of Egypt’s most intriguing women.”—Susan Fraser King

“Delicious prose, an exotic setting, and a heroine that will impress you with her unfailing courage and determination to reclaim what was once hers…historical women’s fiction at its finest.”—History and Women

Stephanie Dray is a New York Times, Wall Street Journal, and USA Today bestselling author of historical women’s fiction. Her award-winning novels include America's First Daughter and My Dear Hamilton, co-authored with Laura Kamoie, and the Cleopatra’s Daughter Trilogy. Her work has been translated into eight languages and often tops lists for the most-anticipated reads of the year. Before she became a novelist, she was a lawyer and a teacher. Now she lives near the nation's capital with her husband, cats, and history books.
Loading...
or support indie stores by buying on