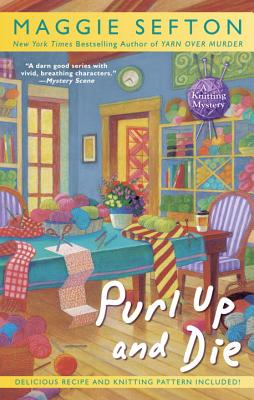 Purl Up and Die (Hardcover)

In the latest novel from the New York Times bestselling author of Yarn Over Murder, Kelly Flynn and the Lambspun Knitters must unravel the truth from the lies to clear a friend's son suspected of murder
Kelly Flynn's summer in Fort Connor, Colorado, is off to a great start with romantic celebrations with her boyfriend, Steve, and enjoyable albeit challenging knitting classes taught by her friend Barb at the House of Lambspun. But while Barb's advanced stitches are giving Kelly the slip, a more deadly problem soon has her friend coming apart at the seams.
A young woman has accused Barb's son, Tommy a young doctor doing his residency of assaulting her. The yarns spun by the local rumor mill are bad enough, but when the young woman is found dead in her ransacked apartment, Tommy becomes the number one suspect.
The police are ready to close the case, but Kelly is convinced that there are a few more likely suspects. Now she has to knit together the clues herself to uncover a killer who doesn t seem to drop a stitch...

Maggie Sefton, the New York Timesbestsellingauthor of many books including Yarn Over Murder, Close Knit Killer, Cast On, Cast Off, Unraveled, and Skein of the Crime, was born and raised in northern Virginia, where she received her bachelor s degree in English literature and journalism. Maggie has worked in several careers over the years, from a CPA to a real estate broker in the Rocky Mountain West. However, none of those endeavors could compare with the satisfaction and challenge of creating worlds on paper. She is the mother of four grown daughters, currently scattered around the globe. Author of the nationally bestselling Knitting Mysteries, she resides in the Rocky Mountains of Colorado with two very demanding dogs."
or
Not Currently Available for Direct Purchase
Copyright © 2020 American Booksellers Association