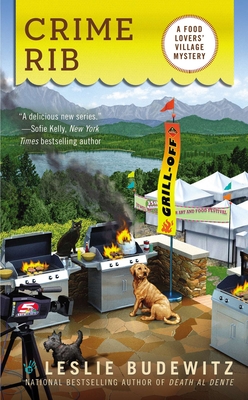 Gourmet food market owner Erin Murphy is determined to get her small Montana town's scrumptious local fare some national attention. But her scheme for culinary celebrity goes up in flames when Jewel Bay’s big break is interrupted by murder in the second Food Lovers’ Village mystery...

Food Preneurs, one of the hottest cooking shows on TV, has decided to feature Jewel Bay, Montana in an upcoming episode, and everyone in town is preparing for their close-ups, including the crew at the Glacier Mercantile, aka the Merc. Not only is Erin busy remodeling her courtyard into a relaxing dining area, she’s organizing a steak-cooking competition between three of Jewel Bay’s hottest chefs to be featured on the program.

But Erin’s plans get scorched when one of the contending cooks is found dead. With all the drama going on behind the scenes, it’s hard to figure out who didn’t have a motive to off the saucy contestant. Now, to keep the town’s reputation from crashing and burning on national television, Erin will have to grill some suspects to smoke out the killer...

“Leslie Budewitz has cooked up another exciting and scrumptious mystery with Crime Rib, the second book in her clever new series about small-town chef Erin Murphy, who’s sleuthing skills are matched only by her gourmet cooking. With a well-crafted plot, believably eccentric characters, and a flowing style, Crime Rib is a mystery to be savored. And if that’s not enough, there’s a special selection of Erin’s recipes at the end. Chocolate mousse cups! Mmmmmm.”—John Clement, author of the Dixie Hemingway Mysteries

“An intriguing sleuth who loves gourmet food, family, and her hometown, plus recipes to die for distinguish a delectable mystery.”—Carolyn Hart, national bestselling author of Death at the Door

“Seldom does a new author hit all the right notes in a first book, but Leslie Budewitz does. Convincing characters, a believable plot, the right dash of romance, and a deft use of words all come together to create a seamless and satisfying read.”—Sheila Connolly, New York Times bestselling author of Golden Malicious and Buried in a Bog

“Leslie Budewitz does not disappoint...If you like your mystery filled with a fresh-thinking sleuth, then you should read this book.”—MyShelf.com

“Yummy...With the eccentric people that make up the rest of the cast, this book is enjoyable.”—RT Book Reviews

National bestselling author Leslie Budewitz writes the Spice Shop Mysteries and the Food Lovers’ Village Mysteries. She fell in love with Seattle’s Pike Place Market as a college student, and still misses prowling its streets and alleys, sniffing out tasty treats and sensory delights. Leslie won the 2013 Agatha Award for Best First Novel for Death al Dente, first in the Food Lovers’ Village Mysteries, and won the 2011 Agatha Award for Best Nonfiction for Books, Crooks & Counselors: How to Write Accurately About Criminal Law and Courtroom Procedure. She loves to cook, eat, hike, travel, garden, and paint—not necessarily in that order. She lives in northwest Montana with her husband, Don Beans, a doctor of natural medicine, and their Burmese cat, Ruff, an avid bird-watcher.
or support indie stores by buying on
(This book is on backorder)