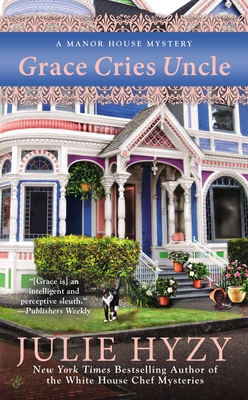 When Grace’s estranged sister Liza shows up on her doorstep, the timing couldn’t be worse. Grace’s beloved boss and benefactor, Bennett Marshfield, has finally gotten her to agree to a DNA test to establish if he is, in fact, her uncle. If so, Grace would move from being the trusted curator and manager of Marshfield Manor to Bennett’s heir. And her duplicitous sister would be right behind her in the line of inheritance.

Liza is not the only mysterious visitor to arrive in town. A man claiming to be an FBI agent has shown up, and a swarm of avaricious antique collectors have descended on Emberstowne for a prestigious convention. When Bennett reveals he’s in mind to acquire a secret antique and the FBI agent turns up dead, the plot thickens. And Grace can’t help but wonder if Liza is at the center of it all…

New York Times bestselling author Julie Hyzy writes both the White House Chef Mysteries and the Manor House Mysteries for Berkley Prime Crime, and has won the Anthony Award and the Barry Award for her work.

“Hyzy...excels at plot and personality...With a dandy storyline and further exploration of Grace’s personal life, Hyzy’s latest succeeds on all levels.”—Richmond Times-Dispatch
or support indie stores by buying on
Copyright © 2020 American Booksellers Association