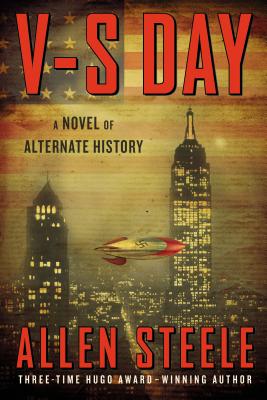 With a gift for visionary fiction that "would make Robert A. Heinlein proud" ("Entertainment Weekly") three-time Hugo Award-winning author Allen Steele now imagines an alternate history rooted in an actual historical possibility: what if the race to space had occurred in the early days of WWII?
It's 1941, and Wernher von Braun is ordered by his Fuehrer to abandon the V2 rocket and turn German resources in a daring new direction: construction of a manned orbital spacecraft capable of attacking the U.S. Work on the rocket--called "Silbervogel"--begins at Peenemunde. Though it is top secret, British intelligence discovers the plan, and brings word to Franklin Roosevelt. The American President determines that there is only one logical response: the U.S. must build a spacecraft capable of intercepting "Silbervogel" and destroying it. Robert Goddard, inventor of the liquid-fuel rocket, agrees to head the classified project.
So begins a race against time--between two secret military programs and two brilliant scientists whose high-stakes competition will spiral into a deadly game of political intrigue and unforeseen catastrophes played to the death in the brutal skies above America.


Praise For V-S Day: A Novel of Alternate History…

Praise for Allen Steele and His Novels

“Bears evidence of fresh thought about the opportunities inherent in science fiction to take the familiar and make it new.”—The New York Times Book Review

“A rich blend of personal and political storytelling.”—Entertainment Weekly

“The closest thing the science fiction world now has to Robert A. Heinlein.”—SFRevu

Allen Steele was a journalist who covered the space program. He later turned to fiction writing and his first novel, "Orbital Decay," published by Ace, was chosen Best First Novel of the Year by Locus. Allen himself went on to be twice nominated for the John W. Campbell award for Best New Writer. He began writing and selling to the science fiction magazines and is a three-time Hugo award winner (and frequent Nebula nominee) for his short fiction. In 2012, he received the Robert A Heinlein award for outstanding published works in science fiction. He and his wife Linda, who is a DJ, now live in Massachusetts.
Loading...
or
Not Currently Available for Direct Purchase