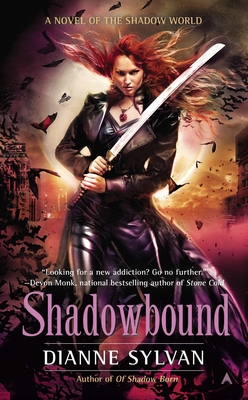 Shadowbound (A Novel of the Shadow World #5) (Mass Market)

Spread throughout the dark corners of our world lies the Shadow World, a society of vampires who feed off the living. In Austin, Texas, one woman must quell the cravings rising within her, as the very fate of the world rests in her hands…

Ever since her Prime, David Solomon, returned from the dead, Miranda Grey has been hungry. The transformation from ordinary vampires into the ultrapowerful children of Persephone has left both Miranda and David craving the taste of death—and their appetites are growing.

Meanwhile, a formerly vague threat from a fringe group of humans has turned into a full-on war. The Order of the Morningstar has devoted itself to eradicating vampires and has begun to assassinate Primes all over the globe.

The Shadow World’s fate depends on the Circle of Signets descended from those who subdued Morningstar hundreds of years ago—but if even a single one is killed, the war is almost certainly lost. Now, with the help of a strange new ally, Miranda must put aside her hunger and access long-forgotten magic to save the Circle, but time is running out…

Dianne Sylvan is the author of Of Shadow Born, Shadow’s Fall, Shadowflame, Queen of Shadows, and two nonfiction titles, The Circle Within and The Body Sacred. She lives in Austin, Texas, with two neurotic cats.

Praise For Shadowbound (A Novel of the Shadow World #5)…

Praise for the novels of the Shadow World:

“This series is getting more interesting by the book.”—Mystifying Paranormal Reviews