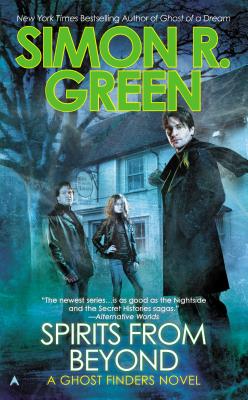 Spirits From Beyond (A Ghost Finders Novel #4)

THE NEW GHOST FINDER NOVEL from the bestselling author of the Nightside and Secret Histories series...

Meet the operatives of the Carnacki Institute—JC Chance: the team leader, brave, charming, and almost unbearably arrogant; Melody Chambers: the science geek who keeps the antisupernatural equipment running; and Happy Jack Palmer: the terminally gloomy telepath. Their mission: Do Something About Ghosts. Lay them to rest, send them packing, or just kick their nasty ectoplasmic arses…

Their latest assignment takes JC and the team to a small country village, site of a famously haunted inn. At first, JC thinks that the spirits in the King’s Arms are more the stuff of urban legend than anything that needs the Ghost Finders’ expertise. Then one story rings true: the tale of a traveler trapped by an unusual thunderstorm who retired to her room for the night—and vanished.

As the team investigates, they are forced, one by one, to face some hard truths about themselves, their relationships, and the haunting itself—truths that may push Happy Jack over the edge into the madness that he has always feared...

Praise For Spirits From Beyond (A Ghost Finders Novel #4)…

Praise for the Ghost Finders novels

“Loads of horrors, thrills, and shocks.”—SFRevu

“The newest series…is as good as the Nightside and the Secret Histories sagas.”—Alternative Worlds

Simon R. Green is also the author of the Nightside series (The Bride Wore Black Leather) and The Secret Histories (Casino Infernale). His previous Ghost Finders novels include Ghost of a Chance, Ghost of a Smile, and Ghost of a Dream. He has also written the Adventures of Hawk and Fisher and the Deathstalker novels. He appears in the anthology Weird Detectives along with Jim Butcher, Neil Gaiman, and Patricia Briggs, among others.
Loading...
or
Not Currently Available for Direct Purchase