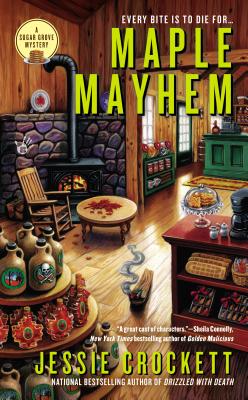 In Sugar Grove, New Hampshire, people are serious about their maple syrup—especially Dani Greene, whose family owns the Greener Pastures sugarhouse.  But when murder disrupts the small-town sweetness, Dani pores over clues to draw out a killer...

Despite being a fourth-generation syrup maker, Dani isn’t stuck in the past. She’s starting a new agricultural cooperative that reduces costs for every syrup producer who joins. Everyone considers it a sweet deal except the die-hard curmudgeon Frank Lemieux—and when a saboteur starts targeting supporters, everyone suspects Frank.

But it turns out they’re barking up the wrong tree when Dani finds Frank murdered in his own sugarhouse. As the sabotage continues, she realizes that Frank was framed. With the help of her family, and a handsome official from the Fish and Game Department, Dani must catch the killer before another syrup maker kicks the bucket.

As a nearly lifelong resident of the Granite State, Jessie Crockett naturally adores black flies, 98 percent humidity, killing frosts in August, and snowbanks taller than the average grandmother. When not working on her next murderous adventure, she enthusiastically putters in her greenhouse, designs bento lunches, and throws parties. She delights in mentoring young writers at a local elementary school. Jessie lives with her husband and children in a village so small, many other New Hampshire residents have never heard of it.
Loading...
or
Not Currently Available for Direct Purchase