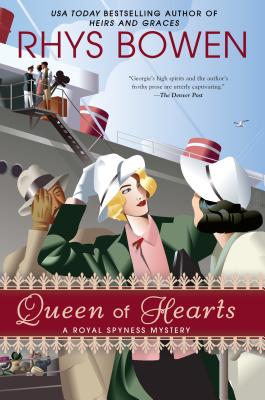 Lady Georgiana Rannoch is off to solve a Hollywood homicide in the eighth mystery in the New York Times bestselling Royal Spyness series.
England, 1934. Georgie's mother, the glamorous and much-married actress, is hearing wedding bells once again which is why she must hop across the pond for a quickie divorce in Reno. To offer her moral support, Georgie agrees to go along on the all expenses paid voyage across the Atlantic.
While her mother meets movie mogul Cy Goldman who insists on casting her in his next picture Georgie finds herself caught up in the secret investigation of a suspected jewel thief. Lucky for her, the lead investigator happens to be her dashing beau, Darcy
Her mother's movie and Darcy's larceny lead everyone to Cy's Hollywood home, where the likes of Charlie Chaplin are hanging about and there's enough romantic intrigue to fill a double feature. But they hardly get a chance to work out the sleeping arrangements before Cy turns up dead. As if there wasn t enough drama already...


Praise For Queen of Hearts…

“Brilliant…So much more than a murder mystery. It’s part love story, part social commentary, part fun and part downright terrifying. And completely riveting. I adore this book.”—Louise Penny, author of How The Light Gets In

“Delightfully naïve, charming and quite smart, Georgie is a breath of fresh air.”—Library Journal

“Charming and lighthearted as ever.”—Kirkus Reviews

Rhys Bowen, a New York Times bestselling author, has been nominated for every major award in mystery writing, including the Edgar(r), and has won many, including both the Agatha and Anthony awards. She is the author of the Royal Spyness Mysteries, set in 1930s London, the Molly Murphy Mysteries, set in turn-of-the-century New York, and the Constable Evans Mysteries, set in Wales. She was born in England and now divides her time between Northern California and Arizona.
Loading...
or
Not Currently Available for Direct Purchase