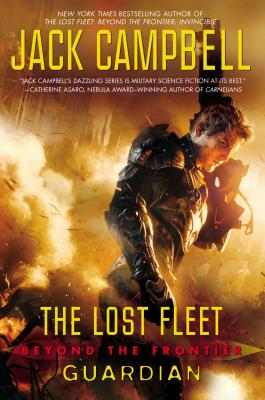 Beyond the Frontier: Guardian

Admiral Geary’s First Fleet of the Alliance has survived the journey deep into unexplored interstellar space, a voyage that led to the discovery of new alien species, including a new enemy and a possible ally. Now Geary’s mission is to ensure the safety of the Midway Star System, which has revolted against the Syndicate Worlds empire—an empire that is on the brink of collapse.

To complicate matters further, Geary also needs to return safely to Alliance space not only with representatives of the Dancers, an alien species, but also with Invincible, a captured warship that could possibly be the most valuable object in human history. Despite the peace treaty that Geary must adhere to at all costs, the Syndicate Worlds regime threatens to make the fleet’s journey back grueling and perilous.

And even if Geary escorts Invincible and the Dancers’ representatives safely unharmed, the Syndics’ attempts to spread dissent and political unrest may have already sown the seeds of the Alliance’s destruction...

“Jack Campbell” is the pen name of John G. Hemry, a retired naval officer who graduated from the U.S. Naval Academy in Annapolis before serving with the surface fleet and in a variety of other assignments. He is the author of The Lost Fleet series as well as the Stark’s War series and the Paul Sinclair series. His short fiction appears frequently in Analog magazine.

Praise For The Lost Fleet: Beyond the Frontier: Guardian…

Praise for The Lost Fleet: Beyond the Frontier novels

“Campbell combines the best parts of military SF and grand space opera to launch a new adventure series…Geary’s Star Trek–like mission of exploration sets the fleet up for plenty of exciting discoveries and escapades.”—Publishers Weekly

“The story line is, as always, faster than the speed of light…Jack Campbell creates a terrific, unexpected spin to his great outer-space saga.”—Alternative Worlds