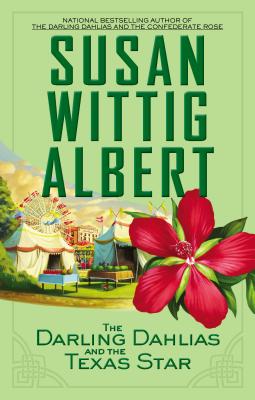 National bestselling author Susan Wittig Albert returns to the small town of Darling, Alabama, in the 1930s where the Darling Dahlias, the colorful ladies of a garden club, are anything but shrinking violets when it comes to rooting out criminals
The Texas Star herself Miss Lily Dare, the fastest woman in the world is bringing her Dare Devils Flying Circus to Darling. Unfortunately, she's also bringing a whole lot of trouble. As the Dahlias prepare for the annual Watermelon Festival where they will present the famous female aviatrix with her own Texas Star hibiscus rumors are flying.
Dahlias president Liz Lacy learns from newspaperman Charlie Dickens that Miss Dare has been threatened and her plane sabotaged. Apparently the bold and beautiful barnstormer has made plenty of enemies. And is it possible she may even be involved with the husband of one of Darling's local ladies?
And speaking of wings, the new cook at Myra May's Darling Diner can fry a chicken andwhip up a sweet potato meringue pie like nobody's business. But why is she keeping her past such a mystery?
As the Texas Star barnstorms into town, Liz and Verna Tidwell offer to help bring down a saboteur who may be propelled by revenge. Before it's all over, there will be plenty of black eyes and dark secrets revealed
Includes Southern-Style Depression-Era Recipes


Praise For The Darling Dahlias and the Texas Star…

PRAISE FOR THE DARLING DAHLIAS MYSTERIES

“[Albert] hits all the right notes…The plot’s believable, the Southern color brims with authenticity, and the characters are charmingly and realistically drawn.”—Richmond Times-Dispatch

“The author of the popular China Bayles Mysteries brings a small Southern town to life and vividly captures an era and culture—the Depression, segregation, class differences, the role of women in the South—with authentic period details. Her book fairly sizzles with the strength of the women of Darling.”—Library Journal

“As always in any [of] Susan Wittig Albert’s series, including this one, the reader feels transplanted in time and place as the meticulous interwoven tidbits bring to life late 1930.”—The Mystery Gazette

“This sweet book captures the true tone of a small town.”—The Times-Picayune

Susan Wittig Albert grew up on a farm in Illinois and earned her Ph.D. at the University of California at Berkeley. A former professor of English and a university administrator and vice president, she is the author of the China Bayles Mysteries, the Darling Dahlias Mysteries, and the Cottage Tales of Beatrix Potter. Some of her recent titles include" Widow s Tears," " Cat s Claw," " The Darling Dahlias and the Confederate Rose," and "The Tale of Castle Cottage." She and her husband, Bill, coauthor a series of Victorian-Edwardian mysteries under the name Robin Paige, which includes such titles as "Death at Glamis Castle "and "Death at Whitechapel.""
Loading...
or
Not Currently Available for Direct Purchase