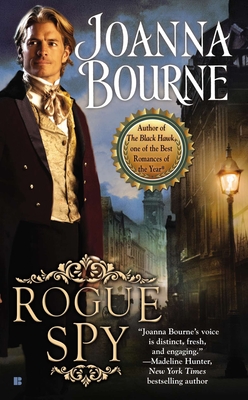 ~Chosen as one of Library Journal's Best Romances of 2014~
For years he’d lived a lie. It was time to tell the truth . . . even if it cost him the woman he loved.
Ten years ago he was a boy, given the name Thomas Paxton and sent by Revolutionary France to infiltrate the British Intelligence Service. Now his sense of honor brings him back to London, alone and unarmed, to confess. But instead of facing the gallows, he’s given one last impossible assignment to prove his loyalty.

Lovely, lying, former French spy Camille Leyland is dragged from her safe rural obscurity by threats and blackmail. Dusting off her spy skills, she sets out to track down a ruthless French fanatic and rescue the innocent victim he’s holding—only to find an old colleague already on the case. Pax.

Old friendship turns to new love, and as Pax and Camille’s dark secrets loom up from the past, Pax is left with a choice—go rogue from the Service or lose Camille forever…

"Joanna Bourne is a master of romance and suspense! I can't wait to read her next book!”—Teresa Medeiros, New York Times bestselling author of Goodnight Tweetheart

Joanna Bourne is the award-winning author of Rogue Spy, The Black Hawk, The Forbidden Rose, My Lord and Spymaster, and The Spymaster's Lady. She has always loved reading and writing romance. She's drawn to Revolutionary and Napoleonic France and Regency England because, as she puts it, “It was a time of love and sacrifice, daring deeds, clashing ideals, and really cool clothing.” She's lived in seven different countries, including England and France, the settings of the Spymaster series. Joanna lives on a mountaintop in the Appalachians with her family, a peculiar cat, and an old brown country dog.
Loading...
or
Not Currently Available for Direct Purchase