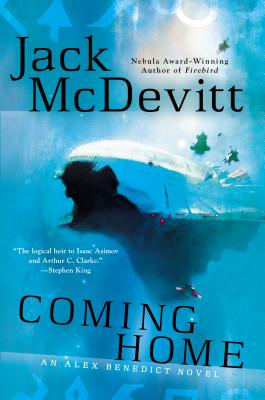 Thousands of years ago, artifacts of the early space age were lost to rising oceans and widespread turmoil. Garnett Baylee devoted his life to finding them, only to give up hope. Then, in the wake of his death, one was found in his home, raising tantalizing questions. Had he succeeded after all? Why had he kept it a secret? And where is the rest of the Apollo cache?

Antiquities dealer Alex Benedict and his pilot, Chase Kolpath, have gone to Earth to learn the truth. But the trail seems to have gone cold, so they head back home to be present when the Capella, the interstellar transport that vanished eleven years earlier in a time/space warp, is expected to reappear. With a window of only a few hours, rescuing it is of the utmost importance. Twenty-six hundred passengers—including Alex’s uncle, Gabriel Benedict, the man who raised him—are on board.

Alex now finds his attention divided between finding the artifacts and anticipating the rescue of the Capella. But time won’t allow him to do both. As the deadline for the Capella’s reappearance draws near, Alex fears that the puzzle of the artifacts will be lost yet again. But Alex Benedict never forgets and never gives up—and another day will soon come around...

Praise for Jack McDevitt and the Alex Benedict Novels

“The Alex Benedict series is reminiscent of some of the work of Isaac Asimov.”—SFRevu

“‘Why read Jack McDevitt?’ The question should be: ‘Who among us is such a slow pony that s/he isn’t reading McDevitt?’”—Harlan Ellison

“An exemplary merger of mystery and science fiction…An intelligent, provocative entertainment by a man who brings energy, style, and a fresh perspective to everything he writes.”—The Washington Post Book World

“McDevitt imagines the far future with precision and believability.”—Library Journal

“McDevitt manages to make the odd coupling of the cozy and the cosmic into effective and moving SF.”—Locus

Jack McDevitt is a former naval officer, taxi driver, English teacher, customs officer, and motivational trainer, and is now a full-time writer. He is the author of the Alex Benedict novels, including Firebird. His novel Seeker won a Nebula Award, and he is a multiple Nebula Award finalist. He lives in Georgia with his wife, Maureen.
Loading...
or support indie stores by buying on
(This book is on backorder)