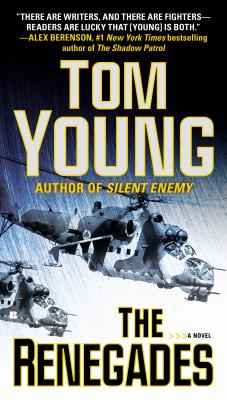 The Renegades (A Parson and Gold Novel #3)

From the author of Sand and Fire and The Hunters..."Fans of Clancy, Coonts, and Dale Brown need to add young to their must-read lists."--Booklist
When a catastrophic earthquake hits Afghanistan, American troops rush to deliver aid, among them Afghan Air Force adviser Lieutenant Colonel Michael Parson and his interpreter, Sergeant Major Sophia Gold. The devastation is like nothing they've ever seen.
It's about to get even worse.
A Taliban splinter group, Black Crescent, has begun shooting medical workers, downing helicopters, and slaughtering anyone who dares to accept Western aid. With coalition forces already spread thin, Parson, Gold, and the Afghan aircrews must find a way to strike back. But they're short on supplies, men, experience, and intel. And the terrorists know it…
"One of the most exciting new thriller talents in years."--Vince Flynn

Praise For The Renegades (A Parson and Gold Novel #3)…

“There are writers, and there are fighters—readers are lucky that [Young] is both.” —Alex Berenson, #1 New York Times bestselling author of The Shadow Patrol

Tom Young has logged nearly four thousand hours as a flight engineer for the Air National Guard in Afghanistan, Iraq, Bosnia, Kosovo, and elsewhere, including Latin America, the Horn of Africa, and the Far East. His military honors include two Air Medals, three Aerial Achievement Medals, and the Air Force Combat Action Medal. He continues to serve with the Air National Guard as a Senior Master Sergeant. He is the author of Silent Enemy and The Mullah's Storm.
Loading...
or
Not Currently Available for Direct Purchase