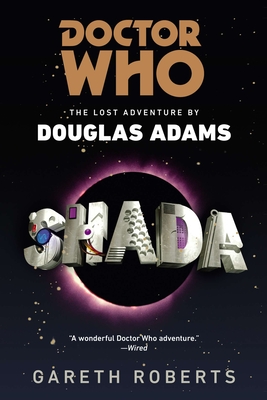 From the unique mind of Douglas Adams, legendary author of The Hitchhiker’s Guide to the Galaxy, comes Shada, a story scripted for the television series Doctor Who but never produced—and now transformed into an original novel.

The Doctor’s old friend and fellow Time Lord, Professor Chronotis, has retired to Cambridge University, where among the other doddering old professors nobody will notice if he lives for centuries. He took with him a few little souvenirs—harmless things really. But among them, carelessly, he took The Worshipful and Ancient Law of Gallifrey. Even more carelessly, he has loaned this immensely powerful book to clueless graduate student Chris Parsons, who intends to use it to impress girls. The Worshipful and Ancient Law is among the most dangerous artifacts in the universe; it cannot be allowed to fall into the wrong hands.

The hands of the sinister Skagra are unquestionably the wrongest ones possible. Skagra is a sadist and an egomaniac bent on universal domination. Having misguessed the state of fashion on Earth, he also wears terrible platform shoes. He is on his way to Cambridge. He wants the book. And he wants the Doctor...

Praise For Doctor Who: Shada: The Lost Adventures by Douglas Adams…

“Roberts . . . does a great job of maintaining Douglas Adams’s voice throughout the story, with his trademark satire and humor firmly in place. Fans of Doctor Who, particularly those who loved the Tom Baker years, will enjoy this little trip back into that world.”—Wired

“There’s a lot to like about Roberts’s version of the story, particularly for fervent Doctor Who fans . . . He clearly knows and loves the series, and fills the book with winking references and in-jokes . . . Most importantly, Roberts captures the bantering, cheerful relationship between the eccentric Doctor, upbeat Romana, and loyal K9 as fans will remember it from the TV series.”—The A.V. Club

“Shada is an entertaining read...Roberts manages a zippy, fast-paced writing style that nods to Adams without ever trying to do any Adamsian acrobatics across the page . . . Fans of Douglas Adams will find this probably the most palatable way to sample one of his most famous lost works, and anyone who enjoys both the big heart and the boundless silliness of Doctor Who will be pleased with what Roberts has managed to put together here.”—io9

“Shada is funny . . . Roberts has a turn of phrase that complements Adams’s dialogue, without slavishly copying his style; various witty asides would sit very comfortably in a Hitchhikers novel . . . Roberts both adds his own jokes and works Adams’ perfectly. Any new fan reading the book, having not seen or heard any of the other versions of the story, would have a very hard time picking out which bits were by Roberts and which Adams.”—Doctor Who Reviews

Douglas Adams was born in Cambridge in 1952, and was educated at Brentwood School, Essex and St. John’s College, Cambridge, where he read English. As well as writing all the different and conflicting versions of The Hitchhiker’s Guide to the Galaxy, he has been responsible for Dirk Gently’s Holistic Detective Agency, The Long Dark Tea-Time of the Soul, and, with John Lloyd, The Meaning of Liff and The Deeper Meaning of Liff. In 1978-79, he worked as Script Editor on Doctor Who. He wrote three scripts for the show: “The Pirate Planet,” “City of Death” [under the name David Agnew], and “Shada.” Adams died in May 2001.

Gareth Roberts was born in Chesham, Buckinghamshire in 1968. His scripts for Doctor Who on television include “The Shakespeare Code,” “The Unicorn and the Wasp,” “The Lodger,” and “Closing Time.” He has also written many scripts for the spin-off series, The Sarah Jane Adventures, as well as scripts for such television shows as Emmerdale and Randall & Hopkirk [Deceased]. He has written nine previous Doctor Who novels, and lives in West London.
Loading...
or support indie stores by buying on