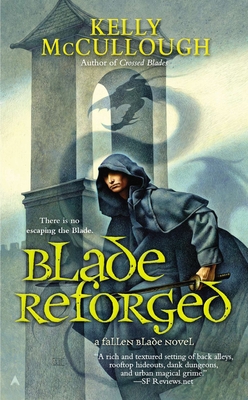 Enter the "fascinating world"(Fresh Fiction) of the Fallen Blade in this thrilling fantasy novel from Kelly McCullpough.

After the fall of the goddess of justice, temple assassin Aral Kingslayer lost his purpose in life and turned to the bottle. That might have been the end of him if luck hadn’t given him a few people to help him get back on his feet—notably the irresistible Baroness Maylien Dan Marchon, who once sought his aid in claiming the throne that’s rightfully hers. Reluctant to resume the role of an assassin, he turned her down.

But now Aral has learned that one of the few people willing to help him in his darkest days has been imprisoned by Maylien’s uncle, King Thauvik. Aral knows he can’t let an old friend die, but the alternative is to return to the life he left years ago. It was the death of Thauvik’s half brother that earned Aral the name Kingslayer, and now he is thrust into a war that will see no end until he lives up to his name…

Praise for the Fallen Blade Novels

“Aral the jack, formerly the noble Aral Kingslayer, is the best kind of hero: damaged, cynical, and despondent, yet needing only the right cause to rise from his own ashes.”—Alex Bledsoe, author of The Girls with Games of Blood

“Filled with multifaceted characters, layered plots, and the type of quixotic scenarios that only the imagination of Kelly McCullough could possibly create. The author, once again, crosses genres…Stories by Kelly McCullough are one of a kind—just like him. I found Aral’s world to be compelling and highly addictive. Brilliant!”—Huntress Book Reviews

“The world McCullough sets up was certainly the highlight of the book for me. I enjoy fantasy-world politics and dark humor, both of which are in abundance here.”—Night Owl Reviews