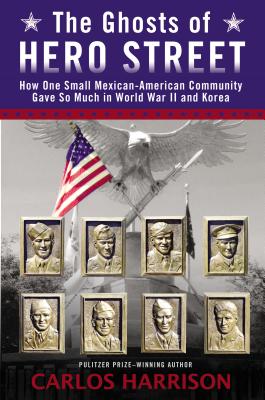 The Ghosts of Hero Street

They came from one street in Silvis, Illinois, but death found them in many places . . .
. . .in a distant jungle, a frozen forest, and trapped in the flaming wreckage of a bomber blown from the sky. One died going over a fence during the greatest paratrooper assault in history. Another fell in the biggest battle of World War II. Yet another, riddled with bullets in an audacious act of heroism during a decisive onslaught a world, and a war, away.
All came from a single street in a railroad town called Silvis, Illinois, a tiny stretch of dirt barely a block-and-a-half long, with an unparalleled history.
The twenty-two Mexican-American families who lived on that one street sent fifty-seven of their children to fight in World War II and Korea more than any other place that size anywhere in the country. Eight of those children died.
It's a distinction recognized by the Department of Defense, and it earned that rutted, unpaved strip a distinguished name. Today it's known as Hero Street.
This is the story of those brave men and their families, how they fought both in battle and to be accepted in an American society that remained biased against them even after they returned home as heroes. Based on interviews with relatives, friends, and soldiers who served alongside the men, as well as personal letters and photographs, "The Ghosts of Hero Street "is the compelling and inspiring account of a street of soldiers and men who would not be denied their dignity or their honor.

Carlos Harrison is a Pulitzer Prize winning journalist, editor, and writer of more than a dozen books available in English and Spanish. A former reporter for Miami s NBC affiliate and a national and international correspondent for the Fox News Channel, Harrison has optioned multiple screenplays, written two award-winning television documentaries, and published hundreds of newspaper articles and magazine pieces in a wide variety of media, from the" Huffington Post "and "Southern Living" to a number of travel, celebrity, and business publications. As a reporter at the "Miami Herald," Harrison shared the 1991 Pulitzer Prize for Spot News, covering the arrest of Yahweh Ben Yahweh, a national religious cult leader accused of ordering the murder of one of his followers."
Loading...
or
Not Currently Available for Direct Purchase