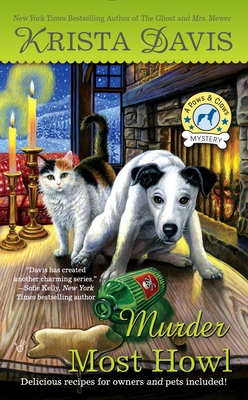 In the third mystery in the New York Times bestselling Paws & Claws series, the Sugar Maple Inn is in for a ruff winter...

This January, Wagtail, Virginia, the top pet-friendly destination in the country, is throwing a fun murder mystery weekend—but no one expected the real thing...

Holly Miller is delighted her grandmother has finally left the Sugar Maple Inn to take a well-deserved vacation. It means Holly’s in charge, but running the inn might be more challenging than she realized. Wagtail’s throwing a weekend-long murder mystery game to draw in tourists during the slow season, the inn has a full house, and a blizzard is on the way.

Trouble is unleashed the night the game begins, when the storm blows in and the lights go out.  It gets worse the following morning when Holly’s Jack Russell terrier, Trixie, discovers a body—one that’s actually dead. Now Holly, her calico kitten Twinkletoes, and Trixie must play by the rules and find one dirty dog...

Praise For Murder Most Howl (A Paws & Claws Mystery #3)…

Krista Davis is the New York Times bestselling author of the Paws & Claws Mysteries and the Domestic Diva Mysteries. Several of her books have been nominated for the Agatha Award. She lives in the Blue Ridge Mountains of Virginia with a brood of cats and dogs, including a snoopy Jack Russell terrier and a nosy calico cat. Her friends and family complain about being guinea pigs for her recipes, but she notices that they keep coming back for more.
Loading...
or support indie stores by buying on