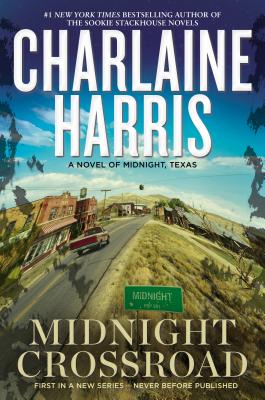 SOON TO BE A NBC TV SERIES
From Charlaine Harris, the bestselling author who created Sookie Stackhouse and her world of Bon Temps, Louisiana, comes a darker locale--populated by more strangers than friends. But then, that's how the locals prefer it...
Welcome to Midnight, Texas, a town with many boarded-up windows and few full-time inhabitants, located at the crossing of Witch Light Road and Davy Road. It's a pretty standard dried-up western town.
There's a pawnshop (someone lives in the basement and is seen only at night). There's a diner (people who are just passing through tend not to linger). And there's new resident Manfred Bernardo, who thinks he's found the perfect place to work in private (and who has secrets of his own).
Stop at the one traffic light in town, and everything looks normal. Stay awhile, and learn the truth...

"With polished ease, Harris brings her cast on stage, pairs them off to reveal character through conversation, and ambles the mystery along...While not ignoring the downsides of smalltown life, with too-knowing neighbors and teens desperate to get out, Harris also works in its joys and comforts. This is a solid entry in Harris’s catalogue and will do very well with her fans."—Publishers Weekly

“Inventive and funny with an engaging, smart, and sexy heroine.”—The Denver Post

Charlaine Harris is a New York Times bestselling author for both her Sookie Stackhouse fantasy/mystery series and her Harper Connelly Prime Crime mystery series. She has lived in the South her entire life. Her Sookie Stackhouse novels include: Dead Until Dark, Living Dead in Dallas, Club Dead, Dead to the World, Dead as a Doornail, Definitely Dead, All Together Dead, From Dead to Worse, Dead and Gone, Dead in the Family, Dead Reckoning, Deadlocked, and Dead Ever After.
Loading...
or
Not Currently Available for Direct Purchase