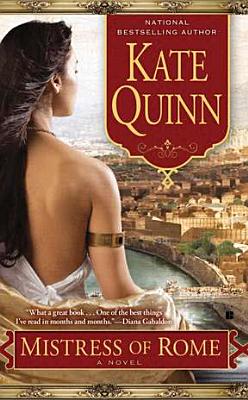 First-century Rome: a world of depravity, blood, and secrets. The ruthless and enigmatic Emperor Domitian watches over all—and fixes his gaze on one humble young woman….

Thea is a slave girl from Judaea, purchased as a toy for the spiteful heiress Lepida Pollia. Now she has infuriated her mistress by capturing the attention of Rome’s newest and most savage gladiator—and though his love brings Thea the first happiness of her life, their affair ends quickly when a jealous Lepida tears them apart.

Remaking herself as a singer for Rome’s aristocrats, Thea unwittingly attracts another admirer: the charismatic Emperor of Rome. But the passions of an all-powerful man come with a heavy price, and Thea finds herself fighting for both her soul and her sanity. Many have tried to destroy the Emperor: a vengeful gladiator, an upright senator, a tormented soldier, a Vestal Virgin. But in the end, the life of Domitian lies in the hands of one woman: the Emperor’s mistress.

Praise For Mistress of Rome…

“What a great book...One of the best things I’ve read in months and months.”—Diana Gabaldon

“Unique and compelling.”—John Shors, author of Beneath a Marble Sky

“Stunning…a novel that is both literary and a page-turner.”—Margaret George, author of Elizabeth I

Kate Quinn attended Boston University, where she earned a Bachelor's and Master's degree in Classical Voice. The daughter of a history major, she grew up with anecdotes about Julius Caesar and Alexander the Great, wrote her first story at age seven, and, after seeing Spartacus, resolved someday to write a book about a gladiator. That ambition turned into "Mistress of Rome." She is also the author of "Daughters of Rome" and "Empress of the Seven Hills. "
Loading...
or
Not Currently Available for Direct Purchase