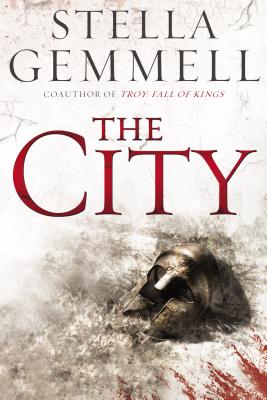 "In her debut solo novel, Stella Gemmell, coauthor of the powerful ("Booklist")conclusion to David Gemmell's Troy series, weaves a dark epic fantasy about a war-torn civilization and the immortal emperor who has it clutched in his evil grasp."
The City is ancient, layers upon layers. Once a thriving metropolis, it has sprawled beyond its bounds, inciting endless wars with neighboring tribes and creating a barren wasteland of what was once green and productive.
In the center of the City lives the emperor. Few have ever seen him, but those who have recall a man in his prime, though he should be very old. Some grimly speculate that he is no longer human, if he ever was. A small number have come to the desperate conclusion that the only way to stop the war is to end the emperor's unnaturally long life.
From the mazelike sewers below the City, where the poor struggle to stay alive in the dark, to the blood-soaked fields of battle, where few heroes manage to endure the never-ending siege, the rebels pin their hopes on one man Shuskara. The emperor's former general, he was betrayed long ago and is believed to be dead. But, under different aliases, he has survived, forsaking his City and hiding from his immortal foe. Now the time has come for him to engage in one final battle to free the City from the creature who dwells at its heart, pulling the strings that keep the land drenched in gore.

Praise For The City…

Praise for Stella Gemmell and Troy: Fall of Kings

“[Stella Gemmell] worked from her husband’s half-finished draft and notes seamlessly to finish this last, powerful title in the saga.”—School Library Journal

“Strong characterizations and sturdy plotting evoke the horror of the conflict, and the story’s mythic power.”—Publishers Weekly

“Hard to put down…Too few authors bring their readers into the story, which is not a problem here.”—SFRevu

“Stella Gemmell’s work…is so seamlessly woven into the whole that there’s no telling where David’s writing ends and hers begins.”—SF Reviews.net

Stella Gemmell has a degree in politics and is a journalist. She was married to the internationally acclaimed and bestselling fantasy novelist David Gemmell and worked with him on his three Troy novels, concluding the final book, "Troy: Fall of Kings," following his death in 2006. Stella writes in what was once the dairy of a fifteenth-century farmhouse. "The City" is her first solo novel.
Loading...
or
Not Currently Available for Direct Purchase