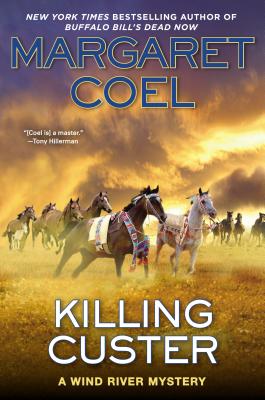 "In her pulse-pounding mysteries, "New York Times "bestselling author Margaret Coel interweaves authentic Native American culture and history with modern-day suspense. In the latest Wind River novel, Arapaho attorney Vicky Holden and Father John O Malley are caught between two cultures that won t let go of the past and a killer who won t leave any witnesses "
The whole town of Lander has turned out for the big parade celebrating the start of the new rodeo season. The main spectacle this year is the appearance of Colonel Edward Garrett a spot-on impersonator of General George Armstrong Custer and a troop of men acting as the ill-fated Seventh Cavalry.
The problem is they are being followed by a group of Arapaho warriors from the Wind River Reservation, who proceed to encircle Garrett and his men in a dare ride just to remind them exactly who won the Battle of the Little Bighorn. But when the ride is over, history seems to have repeated itself: Garrett is dead in the street with a bullet hole in his chest.
No one is sure what happened, but public sentiment quickly turns against the Arapaho and the prime suspect is Colin Morningside, a descendant of Crazy Horse. When a local attorney connected to Morningside disappears, the accusations only grow stronger.
Father John O Malley knows in his heart the Arapaho are not guilty. And Vicky Holden finds herself professionally and personally compromised from getting involved. But what begins as a murder soon reveals itself as a conspiracy that neither Father John nor Vicky could have foreseen. And someone wants to ensure that the truth they discover will die with them

"[Coel is] a master."—Tony Hillerman

“[Coel] brings Native Americans to the fictional frontier in a way that honors the genre.”—The Denver Post

Margaret Coel is the "New York Times "bestselling, award-winning author of the acclaimed novels featuring Father John O Malley and Vicky Holden, as well as the Catherine McLeod Mystery series and several works of nonfiction. Originally a historian by trade, she is considered an expert on the Arapaho Indians. A native of Colorado, she resides in Boulder."
Loading...
or
Not Currently Available for Direct Purchase