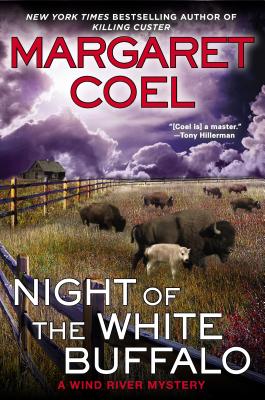 Night of the White Buffalo (Hardcover)

With her gritty mysteries steeped in authentic Native American culture, New York Times bestselling author Margaret Coel is widely considered the most accomplished heir to Tony Hillerman's legacy, (Scripps Howard News Service). In the latest Wind River novel, Arapaho attorney Vicky Holden and Father John O Malley confront a ruthless killer in the wake of a miraculous event.
A mysterious penitent confesses to murder, and then flees the confessional before Father John can identify him. Two months later, Vicky discovers rancher Dennis Carey shot dead in his truck along Blue Sky Highway. With the tragic news comes the exposure of an astonishing secret: the most sacred creature in Native American mythology, a white buffalo calf, was recently born on Carey's ranch.
Making national headlines, the miraculous animal draws a flood of pilgrims to the reservation, frustrating an already difficult investigation. As visitors throw the reservation into turmoil, Vicky and Father John try to unravel the strange events surrounding both Carey's murder and the recent disappearances of three cowboys from his ranch.
It could be coincidence, given the nomadic life of the cowboy trade, but when one of them fails to appear in court to testify on an assault charge, Vicky wonders if Arnie Walkfast and his Arapaho buddies are guilty of more than just assault. And at the back of Father John's mind is the voice from the man in the confessional: I killed a man

Margaret Coel is the New York Times bestselling, award-winning author of the acclaimed novels featuring Father John O Malley and Vicky Holden, as well as the Catherine McLeod Mysteries and several works of nonfiction. Originally a historian by trade, she is considered an expert on the Arapaho Indians. A native of Colorado, she resides in Boulder."

Praise For Night of the White Buffalo…

“Tony Hillerman calls Margaret Coel ‘a master’ of her craft.  It is no wonder. [She] brings Native Americans to the fictional frontier in a way that honors the genre.”
—The Denver Post

“Coel’s mastery at blending the past and present, as well as the blurry lines between fact and fiction, make this a satisfying historical read.”
—Publishers Weekly

“Coel’s characters are well developed, her descriptions, vivid and clear. The plot keeps the story moving quickly and there’s a twist at the end readers may not see coming. As usual, Coel’s dialogue is crisp and authentic and her experience as a historian and expert on Arapaho Indians shows.”
—Examiner.com